This was not a match for the faint hearted. A scrambling, mistake ridden game, which was hampered by a strong gusty northerly wind. Players were content with playing the man instead of playing the ball. However, when the game was to be won both sides displayed fine skills in the fighting finish. Carlton won across the centre and in the rucks, but it's forwards almost cost them the game as they were always under close attention. The Blues stood up to the intense physical pressure applied by the Tigers and were courageous in a come from behind victory. The Blues had regained the lead with only two seconds remaining on the clock!

In a desperate, see-sawing last quarter, Carlton kicked 3.4 to Richmond's 4.3 and still won by a point. Afterwards, Collingwood and Carlton sat on top of the VFL ladder as the only undefeated teams.

"With only 10 minutes to go Richmond made its last magnificent effort. Harris hit the post. Titus kicked a goal and followed it up with another to lead by two points. Strang marked superbly in defence, but Carlton was not to be denied. Crisp missed at point-blank range, and kicked the equalising score. With only a minute left a desperate battle developed. A free kick was given against Richmond. The ball shot out to Cooper, in the open, and a behind was scored just before the bell rang, and Carlton had won by a point."

"Diggins had hardly recovered from his bout of influenza, but played well. He suffered from neuralgia* during the match and was treated by the doctors after the game. He is expected to be fit to lead Carlton again on Saturday." "In appreciation of their gallant victory, the Carlton players will be guests of the president (Mr. Ken Luke) at Mornington on Sunday. In congratulating Carlton on it's success after the match Richmond captain (Percy Bentley) admitted that his team had tried every move to throw Carlton off its balance. Fighting back strongly however, Carlton defeated every move and, in his opinion, deserved its victory." (Argus Monday May 02 p16)

.* Neuralgia - Pain from a damaged nerve.

At the end of this round Carlton were in 2nd spot on the ladder with a percentage of 110.0. 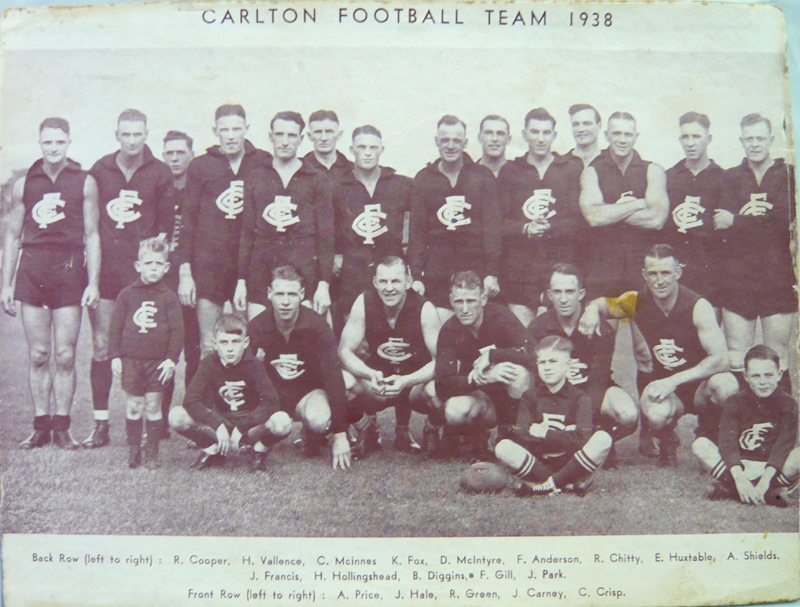