Carlton lost to Richmond by 10 points at Punt Road Oval.

Richmond were too good for the Blues in front of another packed house at Punt Road, but the margin should have been greater - they kicked 4.10 in a dominant last term, and toppled Carlton from top of the ladder to third.

Carlton's Jim Watson would play his last of 91 games for Carlton, all played without kicking a major. He was cleared to Fitzroy for the rest of the season.

The Argus' football writer 'OldBoy' complained about the late start of this match, he said the game did not start until 2.46pm and ended in the gloom at 5.23pm. He checked with the time keepers, who told him that the quarter-time break was 2 minutes, the half-time interval 21 minutes, and the three-quarter time break was just over 7 minutes.

The Blues won the toss and were slow starters and had wasted the dying breeze early in the term. Richmond hadn't been lax and had put on 3 goals in the first 10 minutes, their team work and speed nonplussed the Blues. Fred Gilby then put the Tiger's captain Lilburne out of action with a heavy bump after Lilburne had disposed of the ball.
"Eventually, by sheer strength, the Blues tore forward, and took complete charge for the rest of the term. Five goals were added, the best efffort being a 65 yard torpedo punt by Clover, after he had brilliantly marked over Murdoch, Carlton led by 5.6 to 4.5 at the bell.
Carlton commenced dashingly against the breeze. They were winning in the ruck, where Davey, the 6ft. 3in. youth, was predominating. They were two goals in front with half the term gone. Suddenly a startling change came. Richmond rattled on four goals, and changed a two goal deficit into a two goal lead. Carlton rallied, and levelled the scores, and at the bell Richmond led by 9.10 to 9.8
The third term was full of hard bumps and fearless, thrilling dashes. The wind had dropped. After a period of goal for goal, Carlton gradually gained the upper hand, and had a lead of 16 points. At this stage Duncan, the star Carlton half-back, was put out of action. A Richmond player jumped into his back after he had taken a mark. Duncan could not take his kick, and the ball was bounced. The tall half-back then went forward.
This disaster unsettled Carlton, and Richmond began to pick up, and Titus reduced the lead to 11 points at the last change, 14.12 to 12.13
Shortly after the bell Kelly (Carlton) was dazed when his head came into contact with an opponent's shoulder. When being attended to by the trainers, he suddenly jumped up and started (apparently) to fight them. He then broke away and dazedly joined in the play." (Referee May 08)
Richmond then got on top and added 4.10 to the Blues' 2.1 and ran out winners by 10 points.
Three footballs were used as two balls were kicked out of ground into the arms of waiting youths.


At the end of this round Carlton were in 3rd spot on the ladder with a percentage of 135.6. 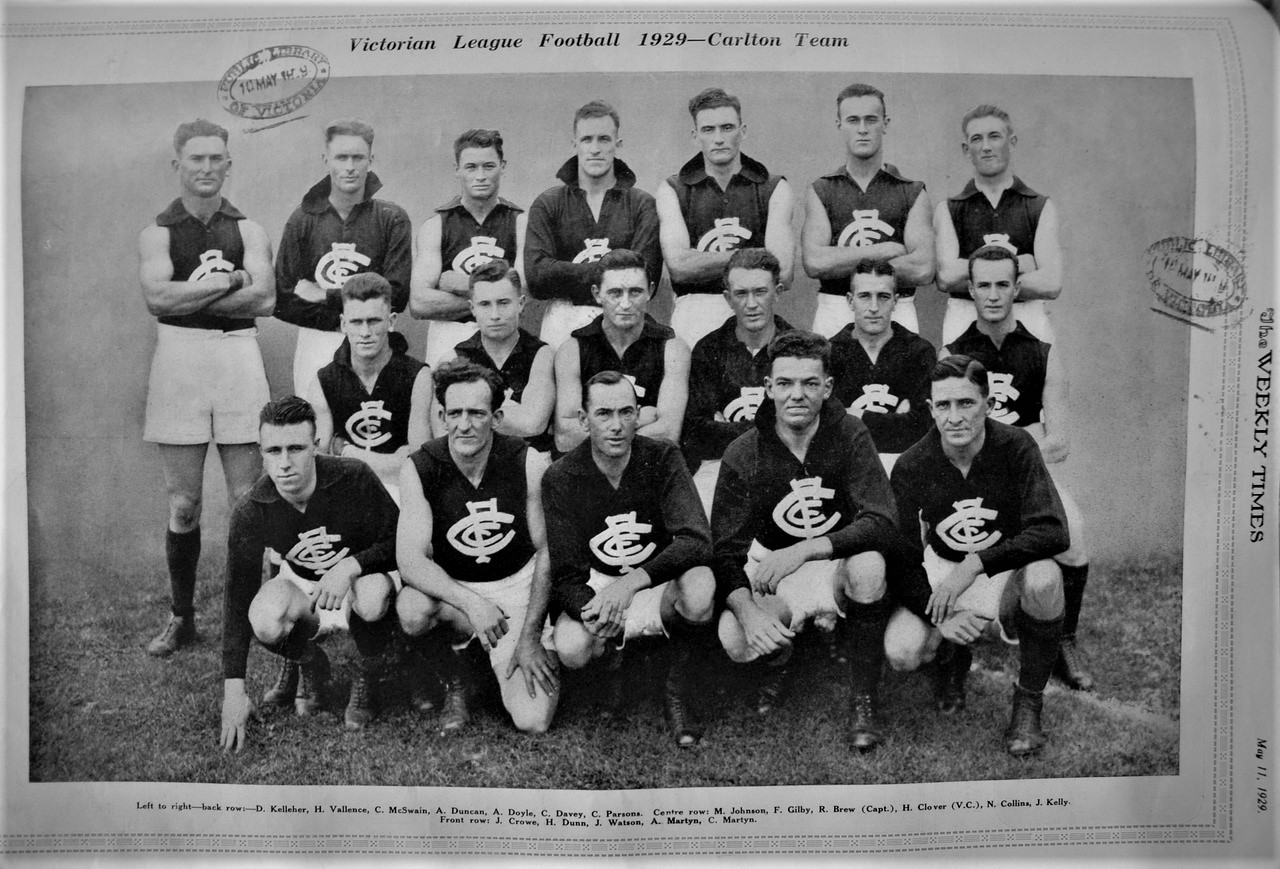