Carlton defeated Fitzroy by 23 points at the Brunswick Street Oval.


From the Rd. 3 Football Record: "Walker went over Gardiner's mark in the third quarter at Fitzroy, and, as the latter kicked, the umpire whistled. However, the ball went through the goal, and there was no necessity to bring the ball back. The goal counted, but if the ball had not gone through Gardiner would have been entitled to another shot. A good many people are not aware of this."

"Challis is a long time reproducing that brilliant form which led to his inclusion in the Carlton team. At Fitzroy, Jack Cooper beat him out of sight; in fact, the Fitzroy skipper did not give him a look in."

"The field umpire missed a point at Fitzroy during the third quarter. In kicking off, Clark ran over the line and doubled back. The umpire did not but should have bounced the ball on the kick off line nearest the spot where the infringement took place."

"Barningham kicked the first goal for Carlton in the first half and the first in the second half of the Fitzroy match. The latter was the result of a glorious
pass by Valentine."

"One of the keenest onlookers of the Fitzroy-Carlton match was " Bongo" Lang, who is still hopeful of being able to resume his place in Carlton's team."

At the end of this round Carlton were in 2nd spot on the ladder with a percentage of 186.1. 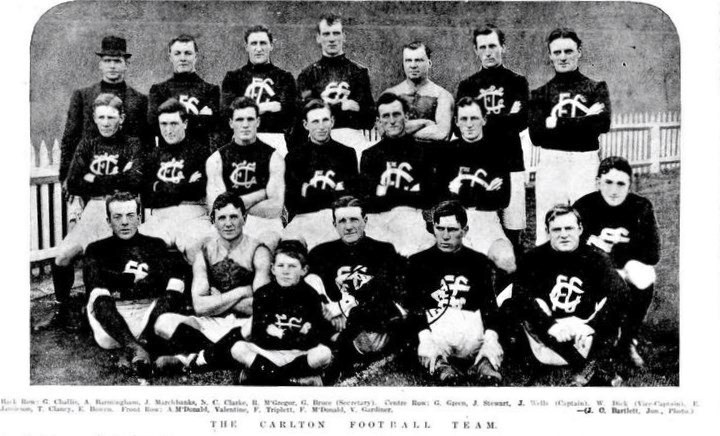