Carlton lost to Hawthorn by 19 points at York Park in Launceston.

For the third week in a row, Carlton went down swinging against a top five side when Hawthorn held the Blues at bay on this Saturday afternoon at York Park in Launceston, Tasmania. Looking for their 19th win in succession in the Island State, Hawthorn led by more than five goals during the third quarter and seemed ready to blow the game wide open, but the Blues dug deep in the final stages and hung on to eventually be beaten by 19 points.

Heading into their first-ever match against Hawthorn at York Park, Carlton made only one change to the team that fell to Sydney in round 18. As expected, Charlie Curnow’s knee injury ruled him out, so Andrejs Everitt was recalled in his place. In front of a good crowd of 18,000-plus on a cool, cloudy afternoon, Carlton won the toss and kicked with the aid of a flukey breeze. Fierce tackling, intensity and mistakes from both teams made for a low-scoring first quarter, with the only two goals of the term both kicked by Hawthorn in a three-minute burst midway through. 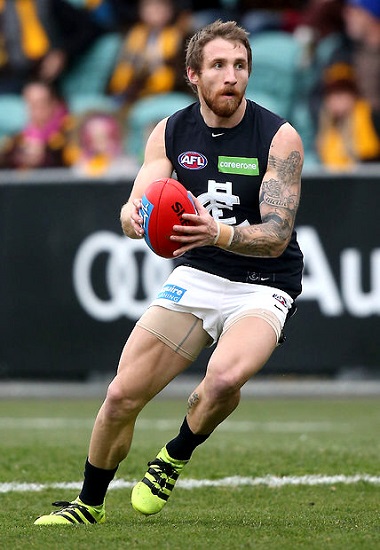 Twelve minutes into the second quarter, Carlton’s persistence was rewarded when Dylan Buckley marked inside the Blues’ forward-50, and his kick split the posts for the visitors’ opening goal. Despite the low scoring, the contest was even and engrossing with both defences well on top. Having returned the favour by keeping the Hawks goalless for the term, Carlton trailed by only six points at the long break, and they were in the match up to their eyeballs.

In a similar scenario to the previous week, the opposing coach blasted his players in the rooms during half-time, and they came out blazing when play resumed. In the first 12 minutes of the third term, Hawthorn locked the ball in their half of the ground and kicked four unanswered goals to break away by 32 points. It was then, with the game in the balance, that Carlton’s leaders in Gibbs, Cripps, Kreuzer, Simpson and Curnow lifted, and began to dominate the clearances. The defence re-organised, and with a sizeable proportion of the crowd behind them, the Blues slammed on four majors of their own to still be only 12 points down on the three-quarter time siren.

Hawthorn drew first blood in the final quarter with a goal to their ruckman Ben McEvoy, before Kade Simpson dashed off half-back and found Jack Silvagni on the lead 30 metres from goal. Jack kicked truly to keep Carlton’s spirits up, and could have had a second major just minutes later, when his strong tackle was rewarded with a free-kick that missed from a sharp angle. Meanwhile, Levi Casboult – who had been hardly sighted for three quarters – was having an influence on the game at last by ranging up the ground from full-forward and bringing those around him into the game. With 23 minutes played in the quarter, clever play by Casboult and Everitt landed the ball with Liam Sumner, who goaled from the right forward pocket. It was all too late however, and when Hawthorn captain Luke Hodge snapped truly right on the final siren, the Blues had suffered their seventh successive loss.

So, where to now for the Blues? Well, despite seven defeats in a row, this Carlton team was still ahead of most rational pre-season expectations, as an average losing margin of 11 points to three almost-certain top-five finalists clearly demonstrated. In Pat Cripps, Jacob Weitering and Jack Silvagni, the Blues could already count on three emerging stars, and captain Marc Murphy wasn’t far away from a return from injury.

In : Andrejs Everitt
Out : Charlie Curnow

Losing Streaks : This was our 7th loss in a row during the season, an unfortunate feat which almost replicated out 7 in a row in Season 2015
Losing Streaks : This was our 14th loss against the Hawks in a row, spanning back to 2005 - a record losing streak against this mob
Scoreboard : For the 2nd round in a row the opposition scored 10.14.74
Interesting Facts : This was the third time in the 60 League matches played at York Park that the crowd was 18,112. Andrejs Everitt was playing in his 2nd match at York Park and his previous game (when playing for Sydney) was Hawthorn's last defeat at this venue in Round 5, 2012. Sam Docherty was also playing his 2nd game at this venue.