Carlton defeated Richmond by 23 points at the MCG.

Carlton would welcome back Stephen Kernahan for this game against cellar-dwellars Richmond at the MCG. Kernahan’s 7 goals were a clear difference to the team, with back-up support from the usual bunch of small forwards.

Again it was a second half surge that nabbed the game for the Blues, after scores were even at half time.

With the win, Carlton moved into second, a game behind eventual premiers Essendon. 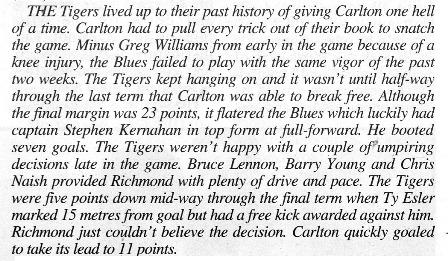