In a scrappy contest on a Sunday afternoon at the MCG, Carlton lost by 7 points to the West Coast Eagles.

When the siren sounded to start the final quarter of this Sunday afternoon match at the MCG, Carlton trailed the West Coast Eagles by 27 points and seemed destined for another hiding. Twenty minutes later, when Patrick Cripps won a free-kick 30 metres from goal, the Blues had charged back into the game to be only 14 points adrift. Had Cripps kicked straight to cut the margin to less than two goals, Carlton conceivably could have won – but the kick veered off-line and West Coast hung on for a slender victory by 7 points. 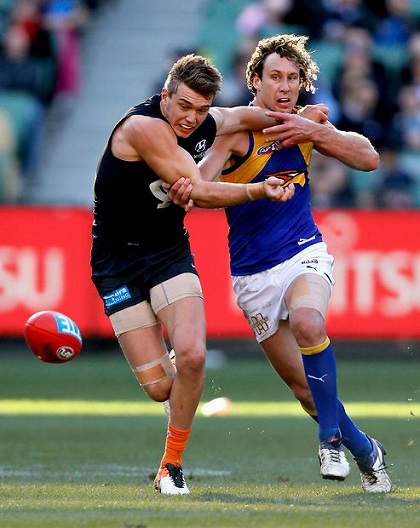 The contrast between the two teams prior to this game was stark. The Eagles were sixth on the ladder after wins in each of their previous three games, while Carlton sat 14th, having lost three in a row. The Blues made four changes at selection, bringing in Dylan Buckley, Charlie Curnow, Nick Graham and Kristian Jaksch for Levi Casboult, Andrejs Everitt, Dale Thomas and Andrew Walker. With the Vice President of the USA, Joe Biden, watching on among the small crowd of just over 26,000, the ball was bounced to start the match on a fine, cool Melbourne afternoon.

West Coast had the best of the early exchanges, although the skills of both teams left much to be desired. Turnovers and errors abounded as the ball was corralled in the Eagles forward-50 for the first 15 minutes. Carlton hearts sank when Jacob Weitering limped to the bench in pain after copping a heavy knock to his right calf, then Ed Curnow kicked the Blues’ only goal of the term after 23 minutes. Meanwhile, Carlton’s defence – particularly Kade Simpson, Sam Docherty and Sam Rowe – stood firm and restricted West Coast’s advantage to 8 points at quarter-time.

Weitering returned to the field early in the second quarter, although he was still visibly limping. After another spell on the bench, he was sent forward as Simpson broke from half-back and kicked long to Jack Silvagni on the lead. Jack nailed the shot to bring the Blues to within a kick of the Eagles, who then struck back with three majors of their own. Right on the half-time siren, Dylan Buckley brought up full points for the Blues with a bomb from the 50-metre line, and at the long break there was 16 points separating the sides. 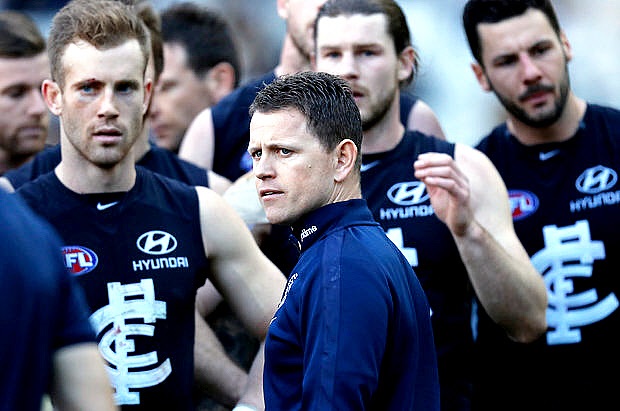 It was a similar story in the third term, with mistakes proving costly and both defences on top. Sixteen fiercely-contested minutes had unfolded before Charlie Curnow kicked deep into Carlton’s attack, and Weitering launched himself skyward to take a big pack mark. Jake strode in and coolly sent the ball straight through the middle for his first career goal, just before Charlie Curnow added another. The gap remained at under three goals until West Coast struck back late with three majors in four minutes to jump clear again. In the shadows of three-quarter time, Matthew Wright scored a brilliant check-side 6-pointer from a near-impossible angle deep in Carlton’s right forward pocket, but the Eagles still looked to be well in control with a lead of 27 points.

West Coast forward Jack Darling could have put the game way out of Carlton’s reach early in the final stanza, had he not missed with both of his regulation shots in the first four minutes. Suddenly, the door to victory was ajar, and the Blues kicked it wide open. Goals to Bryce Gibbs, Sam Kerridge, Cripps and Weitering set up the circumstances for Cripps’ fateful moment, but in the end, the Blues fell agonisingly short.

When assessing this match for positives and negatives, the former outweighed the latter, although perhaps not by much. In losing their fifth game in a row, Carlton’s attack again lacked authority, despite Charlie Curnow and Jack Silvagni both giving glimpses of their undoubted potential. Bryce Gibbs and Patrick Cripps had quiet first halves, but their third and fourth quarters - when they racked up 19 and 24 disposals respectively – were a huge factor in Carlton’s revival. Yet again, Kade Simpson led by example across half-back, with 28 disposals and 10 marks. Playing as a sweeper loose in defence, Sam Docherty continued his break-out season with 32 possessions, 12 marks and 9 inside-50 rebounds, while Sam Rowe kept the AFL’s leading goal-kicker Josh Kennedy to a bare 8 disposals and 2 goals. And Jake Weitering? All class. On one leg, he kept providing a target, and the first and second goals of his career were as much about his courage as his versatility.

Last game (Carlton): Kristian Jaksch
First 2 Goals: Jacob Weitering
Losing Streaks : This loss made it five in a row; Carlton's worst losing streak this year
Goal kicking Brothers : This was the 21st time that brothers had each scored a goal in the same match for Carlton. The previous occasion was round 14, 1996 when Ben and Michael Sexton both hit the scoreboard (in Ben's last League game, and the only time the Sextons did it in the same match). Other Blues brothers to achieve the feat were the McShanes (Henry & Joe, 7 times), The Kernahans (David & Stephen, 5 times), The Baxters (Bernie & Ken, 3 times including the 1949 Grand Final). It also was done once by the McLeans (Ken & Rod), the Kennedys (Ted & Jim), the Gills (Barry & John), and the Crisps (Gordon and 'Mickey').

Interesting Fact : This match between Carlton and West Coast was witnessed by serving Vice President of the United States, Joe Biden, who was hosted and presented a guernsey by Carlton.