Jezza shoots down the Bombers in a sensational victory at Princes Park.


Garry Crane (back) was replaced in the selected side by Bryan Quirk.

This was a sensational game, played at Princes Park between two of the great traditional rivals of the VFL/AFL. In the weeks prior to the game, the recruitment of promising full-forward Greg Kennedy from the Bendigo League had allowed Alex Jesaulenko to switch to the centre with spectacular success. Indeed, on the eve of this match, Jezza was leading most newspaper awards with the likes of Neville Fields, Bartlett, Matthews and Thompson, and the media had built up as the big 'Jezza v Fields' showdown. But when the two sides ran out, Kennedy was missing. Jezza lined up in his place at full forward, and his show began.

After a even first quarter, Carlton blitzed the Bombers in the second term, thanks almost entirely to the brilliance of Carlton's champion. A newspaper report of the day said; ‘In just eleven minutes in the second quarter, Carlton wizard Alex Jesaulenko kicked six goals in a show-stopping demonstration of football magic. Few, if any, more devastating bursts of play have been seen in the long history of football at Princes Park. Essendon players literally seemed to be mesmerised by Jesaulenko, as he flew, wriggled, jinked, dodged, escaped and wove his way through packs of parked Bombers, as if he were Houdini himself. Jezza also gave away another couple of goals, (to David McKay and Brent Crosswell) in the Blues total of 12 straight for the quarter.’

Carlton was still five goals in front at the last break and cruising. Essendon staged a spirited revival late and got within 16 points of the Blues at the final siren, but the result was never really in doubt after Jesaulenko's onslaught.

The Blues retained their 'hoodoo' over Essendon by scoring their 10th consecutive win over the Bombers. Although they started and finished the game better than Carlton, it was a magnificent 12 goal straight burst by the home side during the second term (six by Alex Jesaulenko) that kept the final result away from the 1972 glamour team. - Football Record.

Carlton is an amazing side.
The Blues produced an outstanding performance in the second quarter when they kicked 12 goals straight. This should have meant a landslide victory over a desperate Essendon. However, Carlton's lack of killer instinct when in front become evident again. This allowed Essendon to come back like a good side should - to nearly steal the four points. Carlton has had many situations like this in the past and it is time the Blues started to take notice of the golden rule that the game is not finished until the final siren. There is no doubt that Carlton's team is chockful of class footballers. Players like (Alex Jesaulenko)), Brent Crosswell, Geoff Southby are artists of the game and they make football look easy. In a twinkling of an eye they can absolutely slaughter the opposition. However, when this happens, they become complacent and lack persistency, lose concentration and then are inclined to panic when the opposing side fights back. - Polly Farmer; The Australian.


Blues blitz then have a siesta.
Carlton dominated the first half against Essendon, then allowed the Bombers to doggedly fightback in the last two quarters. Essendon were able to draw with nine points in the last quarter after trailing by 49 points at half-time. David Dickson sealed the game when he goaled a minute later. Although Essendon came back strongly it would be unreasonable to detract from Carlton's performance. At this stage John Nicholls has the difficult task of keeping the Carlton players working keenly and smoothly before keying them up for the finals. A most pleasing aspect of the game from Carlton's viewpoint was the performance of Alex Jesaulenko, who was playing his first game at full-forward for the season. Jesaulenko finished with seven goals..... including six in 10 minutes during the second quarter. - Graeme Kelly; The Australian.


I felt Essendon's come-back took the icing off what was a good win for us. I was particularily pleased about our good forward play in the second quarter which was possibly our best for the season. Our lapse in concentration in the third quarter and last quarters was most disturbing. - John Nicholls. 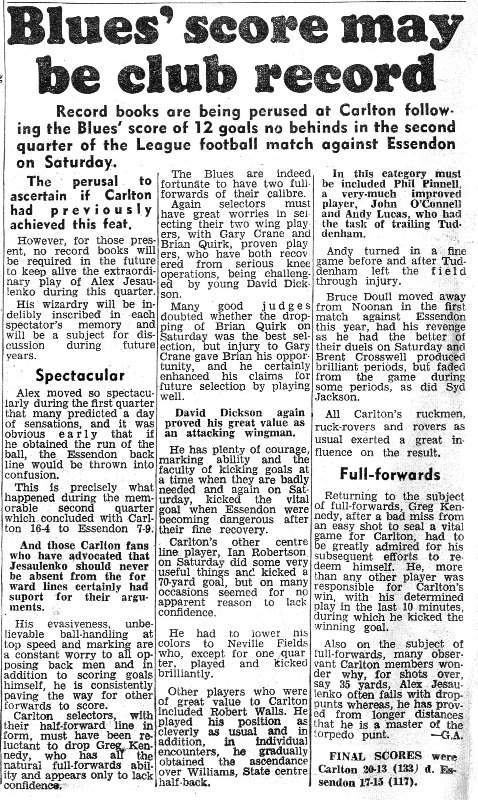