Carlton lose to Essendon by 1 point at Princes Park 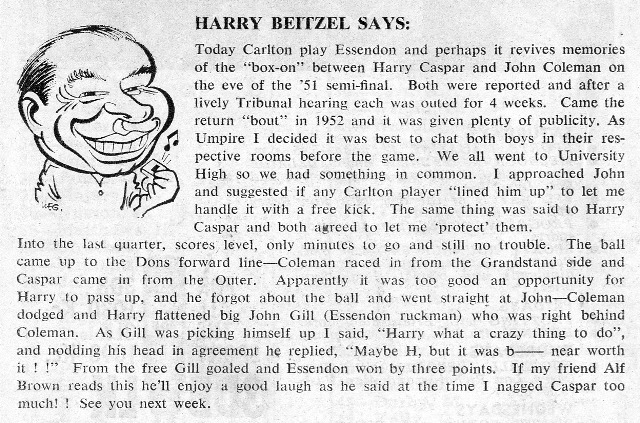 The Blues led by 21 points at half time and looked likely winners. However, the Dons booted 9.3 to 1.3 in the third to lead by nearly five goals at the last change. John Coleman having kicked four goals in the third quarter.
The Argus;
"Carlton was quickly in attack in the last quarter, but three points were expensive misses. Goals by Davies and Howell roused the Blues, but Ken Hands and Coleman both scored points, to leave Carlton 12 points behind as "added time" ticked on.
Another two goals by Davies levelled the scores, and Carlton scented victory. But Hutchison drove the ball to Coleman, and he marked just ahead of a Carlton player 20 yards from goal. The kick went outside the goal post, but the ball had not dropped amongst the spectators when the final siren sounded to give Essendon a win."
The loss highlighted Carlton's weakness in attack. Although Jack Howell led and marked well, his kicking was shocking.