The Blues made it four in a row with this 56-point pummelling of the bottom of the ladder Saints, but the game was far from memorable, with one newspaper accusing the Saints of 'committing every sin in the book.'

The victory was achieved at some cost, including the suspension of key Blues Bill Milroy and George Ferry. St Kilda's Bruce Phillips was reported twice for striking George, but exonerated on both counts. Brian Gilmour copped 4 weeks for striking Noel O'Brien. St Kilda coach Les Foote decided to try to make amends soon after the final siren, by taking his team as a group to the usual after-match get-together - only to find a notice attached to the door advising that the function had been cancelled.

Carlton remained in 7th spot, just one game ahead of Richmond in 8th.

"St.Kilda's display against Carlton proved it is the rightful holder of the 1955 'wooden spoon.' On Saturday's form St.Kilda would have difficulty in beating leading Association sides." (The Saints did win the 1955 spoon)

In a spiteful game Carlton should have won by more than the 56 points. The Blues won all over the ground and left their opponents "flat footed." The game was as good as over at half time with the inaccurate Blues having 21 shots to 4.

As mentioned above, the St.Kilda players were banned from attending the Carlton rooms for after game drinks.
To read the full story click here> http://nla.gov.au/nla.news-article71670885

"I can't understand how St.Kilda hope to get anywhere by playing the type of football they played against us. The fundamental principle in football is to get the ball. I sent my side out to play football, which they did. They were told to give "Nobby" O'Brien the fullest opportunity to score. Once again our captain Ken Hands was the best man on the ground, and he did everything possible to give us a win. I thought Cardwell, the umpire, did a fair job in his first match." 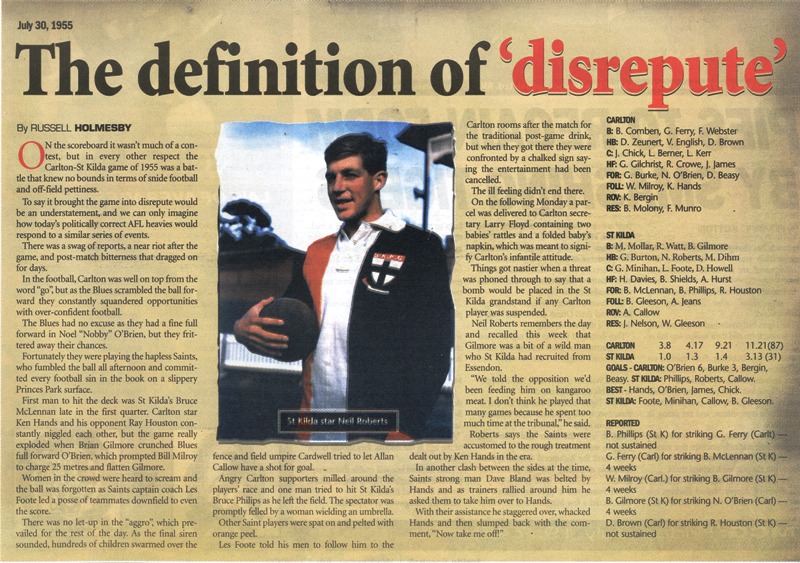