The Blues were blown away in the last quarter, losing by 62 points to GWS at the Sydney Showgrounds.

Despite enjoying a fortnight’s respite after a bye in the previous round, Carlton ran out of legs in the last quarter of this Saturday afternoon match against Greater Western Sydney to be beaten by 62 points. In Bryce Gibbs’ 200th game for Carlton, the Blues never really threatened one of the form sides of the competition, and the Giants remained undefeated at home in 2016 in front of another sparse crowd of 10,355 at Sydney’s Olympic Park.

Carlton lost Dennis Armfield to injury and omitted Daniel Gorringe for this match, replaced by Andrew Phillips and Jason Tutt. Phillips was handed the responsibility of rucking at the first bounce, with Matthew Kreuzer starting forward alongside Levi Casboult and Andrew Walker. In an interesting ploy, Simon White also started in attack, but in a defensive role against Giants playmaker Heath Shaw. 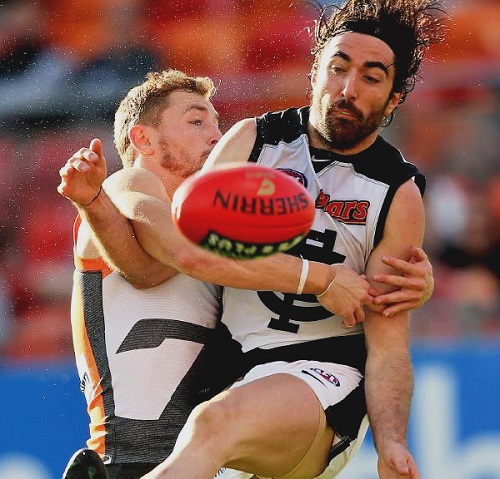 GWS got away to a bright start when their full-forward Jeremy Cameron goaled from a free-kick inside the first minute of play. Former Geelong star Steve Johnson kicked their second before Walker replied for the Blues with a clever set-shot from deep in the left forward pocket. When Sam Docherty broke from the wing and sent a long pass to Kade Simpson thirty metres out from Carlton’s goal, the Blues were three points down and well in the contest, but that was as close as the visitors were to get. In the last eight minutes of the term, GWS slammed through three unanswered majors and led by 23 points at quarter-time.

Carlton had the best of an entertaining second quarter by adding 3.2 to 2.4, thanks largely to Gibbs, Cripps, Docherty and Kerridge. The Giants midfield was swarming, but Phillips and Kreuzer were winning their share of the tap-outs and the Blues defence – in particular Docherty, Byrne, White and Weitering - was holding firm under constant pressure.

The Blues came out resolute in the third quarter and kicked two of the best goals of the match in quick succession. The first came from a Casboult intercept, when big Levi got the ball to Dale Thomas, who found Matthew Wright at the top of the goal-square. From the subsequent centre bounce, Tutt marked just inside the 50-metre arc and his calm set-shot sailed between the posts to put the Blues back in the match. Meanwhile, Johnson, was a constant threat up forward for the Giants, and his accurate snap for his third major from 15 metres snatched back a four-goal advantage. Andrejs Everitt, White and Sam Kerridge then all had opportunities within scoring distance for Carlton, but each missed and a three-quarter-time the Blues were trailing by 29 points.

Any hopes of a Blues revival were snuffed out early in the final quarter, when the GWS midfielders broke Carlton’s resistance and their forwards piled on seven goals to two for an emphatic victory. Having chased and tackled hard for three quarters, the Blues had nothing left when it mattered most, and the way the team folded under the Giants’ relentless pressure was a real concern.

On a more positive note however, Bryce Gibbs, Sam Docherty, Pat Cripps and Kade Simpson continued their outstanding individual seasons. In his milestone match, Gibbs led by example with 29 disposals, 10 clearances, 9 tackles and 4 inside-50 entries. Cripps spent the match with at least one opponent hanging off him, yet still managed 19 disposals (10 contested) 7 clearances and 4 tackles. Docherty was outstanding in the first half and valuable throughout, finishing with 30 disposals and 7 rebound-50s. Andrew Walker kicked three goals, while Simon White took 8 marks and kicked a goal as he kept Shaw under wraps for the entire game.

Losing Streaks: This was Carlton's fourth loss in a row against the Giants.