Carlton steamrolled Freo in the second half at Subiaco, winning by 15 points - in bright yellow guernseys!

After successive losses to St Kilda and Essendon, Carlton’s moment of truth in regard to season 2009 came in this Sunday afternoon showdown with Fremantle at Subiaco. Teetering on the brink of finals contention in eighth place on the ladder, the Blues began the weekend one win behind Essendon, with Hawthorn and Port Adelaide both breathing down our neck.

As this round of matches unfolded however, the Hawks and the Bombers had both suffered huge defeats by the time the teams ran out onto Subiaco Oval on Sunday afternoon, and the stakes for Carlton had suddenly became much higher. Now, a win over the Dockers on their home turf would displace Essendon from seventh spot, and see the Blues climb back to within one win of the top four. 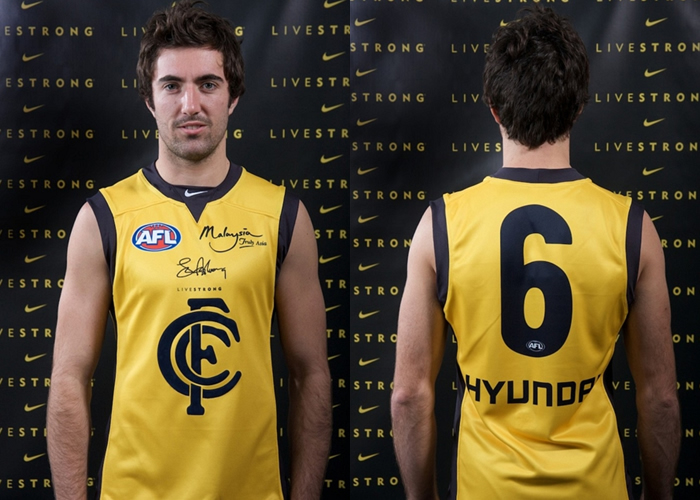 Carlton’s match committee had recast the team on selection night, axing Nick Stevens, Heath Scotland, Jordan Bannister and Stephen Browne, while a knee injury to Paul Bower ruled him out as well. Bret Thornton, Jordan Russell, Chris Johnson, Greg Bentley and Jeffery Garlett came into a Carlton side that emerged into the sunlight at Subiaco resplendent in a bright yellow strip.

This was only the second time since 1897 that the Blues had worn an alternative uniform in a match for Premiership points – other than the famous (or infamous – depending on your view) M&M match against Adelaide in 1997. On this occasion it was an initiative in support of cancer research. All guernseys were auctioned online after the match, with the proceeds split between Livestrong and the Peter McCallum Institute.

Carlton captain Chris Judd won the toss and kicked to the outer end in the first quarter. A physical opening, with players grappling and sledging each other all over the ground, seemed to unsettle the Blues. Freo burst from the blocks, and in ten electric minutes, slammed through four goals.

Bryce Gibbs, Marc Murphy and Judd did their best to re-focus the team, but the wheels were threatening to fall off for Carlton when ill-discipline (and an errant female trainer) resulted in no fewer than four 50-metre penalties being awarded against us in the quarter. Three of these brought goals, including two in a row when Michael Jamison threw an opponent to the turf in Carlton’s goal square, followed almost immediately by the aforementioned trainer encroaching on the mark. Freo were in almost complete control at the first break, with their giant ruckman Aaron Sandilands giving them first use of the ball. No wonder then, that Carlton coach Brett Ratten tore strips off his team in the huddle.

The situation got worse soon after the restart, when Freo full-forward McPharlin goaled to put his side 34 points up. Ratten rang the changes, and Eddie Betts’ switch to the midfield paid off when his instinctive pass found Setanta O’hAilpin for Carlton’s second goal. Suddenly, the Blues clicked. Jordan Russell’s inspirational tackle on the 50-metre arc won him a free kick, and his booming drop punt brought up both flags. Three more came through Fevola, Gibbs and Johnson, before the lively Hayden Ballantyne got one back for Freo, and the margin at half time was 11 points in favour of the home side.

The vital third quarter unfolded much as the second had. The Dockers goaled first to stretch their advantage to 18 points, then the teams swapped goals all the way through to the last break, although it did seem that the Blues – through Judd, Murphy and Gibbs - were getting on top. Sandilands had spent long periods on the bench in this term, apparently favouring an ankle.

Kicking to the scoring end in the last term, Carlton was ignited by Judd, whose pack-busting clearance at the 2-minute mark brought a long kick forward for Carlton, and Brendan Fevola took a superb one-handed mark in Carlton’s goal square. His major cut the margin to 12 points and the Blues were charging home. When Gibbs bombed a ripper on the run from 50 at the six-minute mark, the Blues led for the first time in the match. Carazzo then added another, before the sealer came from Kreuzer after a superb tackle at half-forward from Judd.

The final margin was 15 points, in a match that produced mixed feelings afterward. With their captain and gun forward Matthew Pavlich absent through injury, and ruckman Sandilands virtually unsighted after half time, it had taken a huge effort by the Blues to overhaul the depleted Dockers.

Then again, any win interstate is a positive, and this one was achieved by the brilliance and hard running of Carlton’s at-times unstoppable midfield combination of Chris Judd (35 possessions) Bryce Gibbs (33) and Marc Murphy (27). Andrew Carrazzo was busy after half time and ended up with 33 possessions, while Setanta O’hAilpin again marked strongly and finished with four goals. Brendan Fevola was obviously hampered by soreness in a finger that was operated on during the week, but worked hard all match and was a constant threat to the Docker defence.

The average age of this Carlton team was 23 years, 89 days, with an average League experience of 68.5 games per player. Brendan Fevola was the oldest, at 28 years, 166 days, and the most experienced with 178 games. Jeffery Garlett was the youngest and the least experience at 19 years and 336 days and playing in only his seventh senior game.

First Goal (Carlton): Chris Johnson
First Brownlow Vote: Setanta Ó hAilpín earned his first Brownlow Vote in his 52nd match.
Alternative Guernseys: The Livestrong Guernsey! Carlton wore a special guernsey in support of the Livestrong and Peter Mac charities. The bright yellow jumpers were to be auctioned on eBay after the game, with all proceeds to be split 50/50 between the two charities. A full Image Gallery of the guernsey can be found here.