Fitzroy in the Match of the Day? It was true...the Lions had just completed nine wins in a row to climb to second on the ladder. 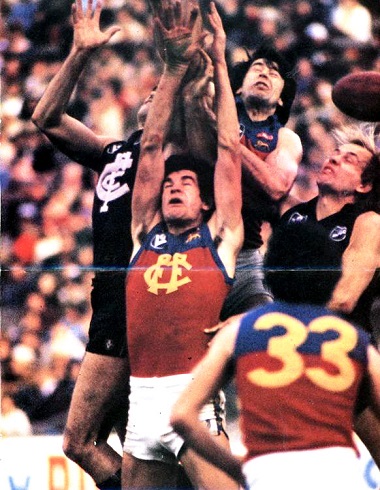 On a typical Waverley Park day, with the wind howling to the southern (or freeway) end, the Blues celebrated Bruce Doull's 200th in style by thumping Fitzroy. Having won the toss, Jezza kicked with the gale. The Blues had all the play early, but from 11 scoring shots, kicked a disappointing 4 goals 7 behinds.

However, the second quarter opened with Carlton running the ball into the wind in waves. We kicked four goals to Fitzroy's none in the first ten minutes, and were suddenly eight goals in front with the match all but decided. The highlight at this point was a searching torpedo punt on the run from Alex Marcou - a beautiful kick that he kept low for maximum distance against the wind.

The crowd was large and the conditions were terrible, yet Carlton played as if it was dry, and our opponents were made to look second rate.
After disposing of the second side so easily, this result really did give an indication that Carlton was the team to beat in 1979.

In other important matches in this round, Essendon moved up to second with a win over Footscray, and North Melbourne returned to their best form to beat Geelong. After 14 games, the top five were Carlton, Essendon, Fitzroy, North Melbourne and Collingwood.

League leaders Carlton ran Fitzroy off their feet to end the Lions run at nine straight wins with a convincing 51 points win at VFL Park. The Lions were never in the race as Carlton's small men Alex Marcou, Wayne Johnston, Jim Buckley and Trevor Keogh proved to be too quick and clever for their opponents. - Football Record.