Carlton comfortably accounted for an undermanned Gold Coast on this Sunday afternoon at Docklands, to register the Blues’ first back to back victory for more than 12 months. A five-goal opening quarter by the Suns gave them the early momentum, but the Blues surged from mid-way through the second term to set up the win.

Gold Coast had been touted as likely finalists in the lead-up to the 2015 season, before some irresponsible off-field misbehaviour and a string of injuries to key players derailed their prospects. With just one win in the bank by mid-year, the Suns were faring even worse than Carlton, and it seemed likely that the loser of this contest would firm into favouritism for the wooden spoon.

Carlton made two compulsory changes at the selection table, having lost Bryce Gibbs through suspension, and Andrew Walker with an on-going knee problem. David Ellard and Nick Holman were chosen as replacements, with Holman designated as the Blues’ substitute in his second senior game. Carlton lined up with Lachie Henderson, Levi Casboult and Andrejs Everitt in attack, and with Sam Rowe and Zach Tuohy in the key defensive posts.

The first quarter was a fierce but sloppy contest, as both side seemed anxious – especially in front of goal. Matthew Kreuzer, Tom Bell, Marc Murphy and Patrick Cripps were prominent for Carlton, while the Suns’ big forwards Charlie Dixon and Tom Lynch provided viable marking targets for their side. When Lynch kicked his second major at the 13-minute mark of the term, it put Gold Coast in front for the first time. Troy Menzel then suffered a knock to his reconstructed right knee, and while he was off the field receiving treatment, the Suns stretched their lead to 14 points as the quarter-time siren sounded.

Carlton shifted up a gear in the second quarter, but couldn’t capitalise on the scoreboard until Tuohy charged into attack and bombed a trademark long goal after seven hectic minutes. Chris Yarran added another, and when Dennis Armfield used his pace to advantage to kick a third, the Blues had regained the lead. Henderson then took a big contested mark and kicked truly. Dixon won a very lucky free-kick against Simon White and replied for the Suns, but Everitt’s goal from wide out gave Carlton a well-deserved break of 16 points at half-time. 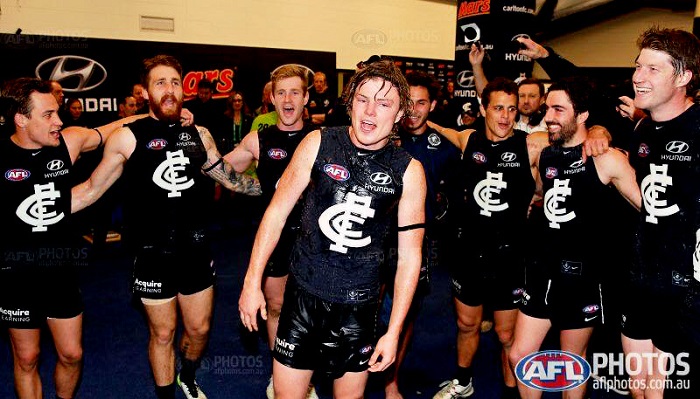 Although Menzel briefly returned to the field for the second half, he couldn’t stretch out with his customary freedom and was substituted by Holman after only eight minutes. Dixon marked strongly for the Suns and kicked his third goal, then Lynch added another to cut the Suns’ deficit to only eight points. The Blues wobbled briefly, before Kade Simpson’s steadiness across half-back, and the sight of Dixon limping from the ground (with an ankle problem that prematurely ended his afternoon) gave the home side a welcome lift. Goals to Casboult and Dylan Buckley, and behinds to Bell (2) Everitt (2) Henderson and Ellard stretched Carlton’s advantage to 22 points at the last change, when the Blues were already travelling like winners.

Nick Holman stepped into the limelight early in the last quarter, and his precise left foot set up shots on goal for Bell and Henderson. Tom missed, but Lachie kicked truly and from that point on Gold Coast visibly wilted. The final margin in Carlton’s favour was 34 points, although it should have been greater.

For the second successive week, the Blues benefitted from an even contribution from all players, with Bell (32 disposals) Murphy, Cripps, Simpson, Everitt and Tuohy leading the way. Marking forwards Henderson, Everitt and Casboult kicked eight goals between them, and interim coach John Barker balanced his ledger at two wins and two losses in four games.

Games Records: Levi Casboult equalled Peter Rohde's record of 46 games in Carlton's Guernsey number 41.
Interesting Fact: This was the first time in over a year that Carlton had won two games in a row.