Carlton skin the Cats by 5 goals at the MCG.

Carlton would take on the Cats at the MCG in an important game for their 1993 season. With 5 or so teams sitting just outside of the Final 6, and the Cats sitting in 7th (Carlton at 10th), the Blues had to win this game to build up some confidence and stay in touch with ladder leaders North Melbourne, West Coast and Essendon.

Early on Geelong looked in control, particularly with the umpires gifting both Gary Ablett & Bill Brownless soft frees in front of goal. In the third quarter great long goals from both Andrew McKay & Craig Bradley who launched a torpedo on the run from 60 metres out, would see Carlton take control of the match & run out comfortable winners.

A mark in the last quarter from Steven Kernahan between two Geelong opponents was also a highlight.

Sexton, Bradley and McKay would take home the votes, but it would be ‘Rocket’ Ron De Iulio who would steal the show with 4 goals from the pocket.

The win would catapult the Blues over the Cats and into 6th position, just half a game out of the Top 6 (North, West Coast, Essendon, Hawthorn, Adelaide and Collingwood). Just a short week later, the Blues would take on a Top 6 team and smash them, continuing their good run of form and moving into the Top 6. 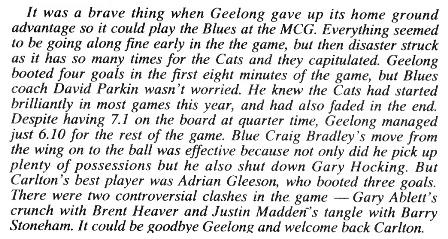