A strong cross wind early in the game hampered good play. The home team scored the first two goals but Carlton quickly answered through Ken Hands. The Blues again attacked and Jack Howell who was rucking well received a free at the boundary throw in and kicked truly. Essendon replied, then good play by J. Howell and Herb Turner enabled Ken Baxter to goal. At quarter time the Blues trailed by 2 points.
Essendon extended their lead with a goal. Carlton missed a opportunity to goal, but Ken Hands and Clinton Wines combined well to get the ball to Jack Conley for a major. Carlton went forward and wasted their chances in front of goal. Close to half time, ten points down and and Jack Howell marked strongly but was fortunate his mis-kick found Ken Hands and Ken Baxter marked in the goal square who goaled. Three points down at half time.
Carlton attacked from the bounce and Ken Hands to Jack Conley whose clever left foot snap gave the Blues the lead. Bert Deacon was a stumbling block for the Dons at centre half back, his marking and kicking to position were a highlight. Ken Baxter added another goal and the Blues held a handy lead. Essendon replied with two quick goals and were getting on top in the ruck. However, the Blues' back line was still dominating, but then Bert Deacon received an injury and Bob Chitty took over his role. Deacon was sent forward and his long shot hit the post. The Dons goaled to regain the lead on the bell. At three quarter time the Blues trailed by 4 points.
The Blues applied the pressure and the the home team had to withstand fifteen minutes of fierce football with Carlton continually breaking down on the forward line. Ken Baxter then found the opening and Carlton hit the front. Carlton were the faster team and Essendon's play became ragged. With desperate play they attacked but the Blues backs held firm, until the Dons received a free kick in front of goal and lead changed hands. Essendon extended its lead when a snap went through for an eight point lead. Bert Deacon tried to lift his team but without luck. Deep in time-on Essendon then added a couple of goals to run out comfortable winners by 21 points.
After the game Bert Deacon was taken to hospital for anti-tetanus injections.

Wanted To Fight But Shook Hands.

"In the second quarter of the Essendon-Carlton match a man in a brown suit ran from the grandstand reserve to the centre, and attempted to hit Cassin, who was standing on Garby's mark.
Cassin grabbed the intruder by his waistcoat. The man slipped, got up shook hands with Brown, and ran off again.
Police constables moved towards the man, but made no attempt to arrest him."
(Sporting Globe July 06 p3 edition 1) 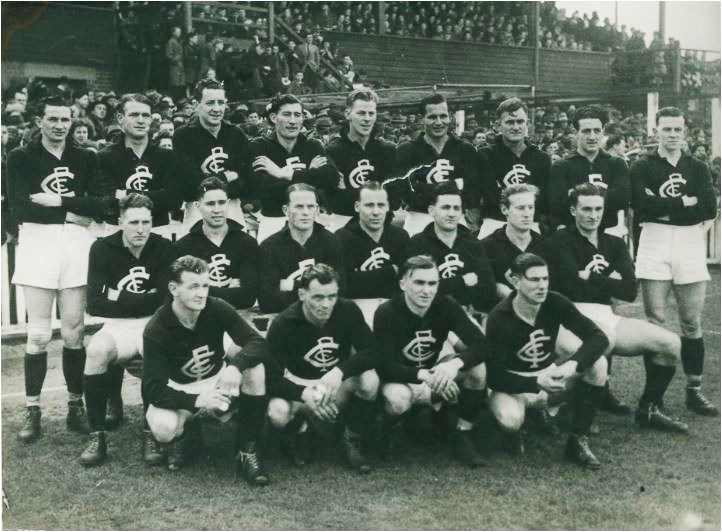