Carlton defeated St Kilda by 3 points at the Junction Oval.

The Leader said it was the biggest crowd ever assembled at the ground with fully 25,000 people crammed into the seaside arena. The Blues were aided by the wind in the first term and managed 4.5 to nil, but the Carlton players "were smarter and nippier to the ball." The Saints hit back in the second quarter, but the Blues held onto a 8 point lead at the half time break. "Just as the play was resumed the aviator Guillaux circled round the ground, and the vast crowd greeted his appearance with vociferous cheering. He planed down from a vast height, till the whirr was distinctly audible. The game still went on, but most necks were craned upwards." The Saints were on top but the Blues' back line held them out. Despite their efforts the Blues led by 10 points at the last break. With 5 minutes remaining only 2 points separated the teams with the home side attacking. Challis and Burleigh were playing well and Daykin extended the lead to 3 points. With the crowd in a constant roar the Blues held on for a close victory.

Melbourne Punch;
"The Blues, with the wind, got the early doors, the first quarter giving them a lead of 4.5 to nil."
(The Blues got out to a lead of 34 points in the second term. The Saints' "Wels" Eickie was unstoppable, and Dave McNamara although injured, was a tower of strength in their defence.)
"It was a dandy exhibition of football, and the Saints made the best recovery seen this season. Saints' supporters say that had Collins, with a mark near the Blues' goal, not attempted to give Schmidt possession of the leather, results would have been different, for a Carlton man dashed in, intercepted the pass, and sent the gobule out of the danger zone. Oh! that little word "if." So small, and yet the amount of meaning it can convey.
Early in the game onlookers saw some fine chain work by Carlton. One instance when Daykin, McKenzie, and Lowe combined, with the result that Burleigh scored a sixer, was a beautiful piece of concerted work, and thoroughly deserved the applause bestowed.
Thanks to their early lead, the Blues pulled through; but the Saints gave them an anxious time, especially in the last five minutes. The Blue defenders were working overtime with a vengeance. Doing one shift, they joyfully took on the second twice as strenuous as the first, and as the gobule sailed into their territory, back it went to the centre with all the power of a 12-stone boot.
Two men stood out in defence. Alf Baud and Billy Dick (on the half back line) gave a display such as is seldom witnessed. "Scotty" Lowe, the ex-Magpie, produced a different line of goods from those exhibited the previous week against Collingwood. Repeatedly he left his St.Kilda opponent standing, and his dashes being brilliancy personified. Of McGregor much has already been said, and his name can be bracketed with Lowe.
The whole eighteen put in good work. Green, Fisher, and Challis, with Haughton and Triplett, were going strongest where the battle waged the hottest. It was Charlie Hammond's turn to meet with accident. His work in defence up to the penultimate act lacked little in finish and effect, and when his knee was injured his position was in attack.

At the end of this round Carlton were in 3rd spot on the ladder with a percentage of 122.4. 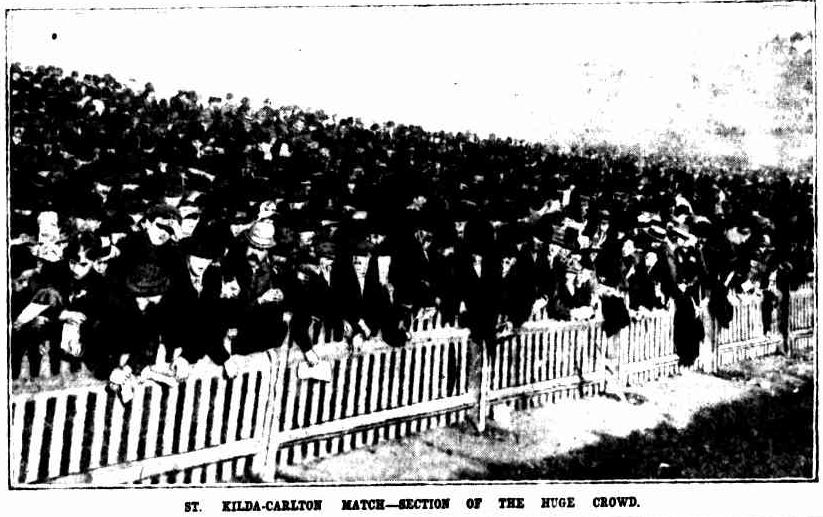 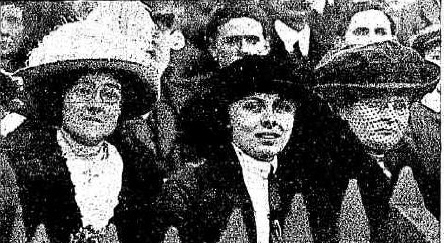 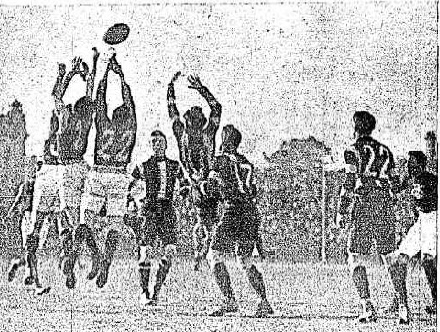 Carlton's Bill Cook No. 22 (white shorts) flies for a mark in the Round 11 clash with St. Kilda. In front of Bill looks like Ted Brown (2), and Jack Lowe (30), with possibly Rod McGregor on the far right.
Photos: Melbourne Punch July 02

Play is interrupted as players watch French aviator Maurice Guillaux as he puts on a performance in his Bleriot aeroplane.