This match was played at St.Kilda's Junction Oval. The military were still occupying South's Lake Oval.

This entertaining rematch of the 1945 "Bloodbath" Grand Final was played on Easter Monday. Many of the combatants were absent due to suspension, while Carlton's Vin Brown, Jim Clark and Jim Baird were all running at Stawell. Ken Baxter kicked seven goals in Carlton's win, and popular clubman and two-time Premiership rover Albert 'Mick' Price retired after eleven seasons.

A crowd of 38,000 packed into the St Kilda ground to watch a bloodless but entertaining replay of last years 'Bloodbath' Grand Final between South Melbourne and Carlton. Both sides were missing their suspended players, but South had the great Bob Pratt back after his time in the VFA. Unfortunately Pratt broke down with a serious leg injury after kicking two goals. Carlton's Ken Baxter kicked seven goals. - 100 Years of Australian Rules Football.

"I left the Carlton-South match wondering just how Carlton selectors were to fit Clark, Brown, Turner, Price, Jim Baird, Chitty, Savage, and Fitzgibbon into the side. For reasons of cricket, running or suspension those players of the 1945 premiership side were not available on Monday.
Chitty, Savage and Fitzgibbon will not be available for several weeks, but the problem of fitting in the others is an immediate one.
Waiting for permits from Western Australia are George Bailey and Henfry. Both men have outstanding qualifications.
The side against South had three weaknesses. These were on both wings, half back and at centre half forward. There young Hands is allowing temperament to undermine his football. They 'get him in.' Then his good football finishes. He is entitled to more protection, for his lack of a cool head is the bait on which opposing defences catch him.
There are too many good players at Carlton to countenance this phase of a young players' development. Its up to Hands.
Even allowing for replacements in these three positions, could Carlton drop two of Monday's ruck men to include Baird and Savage? Bennett was least prominent of the opening rucks, but far from badly performed. Howell was a champion. Ollie Grieve much improved after service duty, was little behind him. Rod McLean the other ruck man picks himself.
The rovers, Mooring and Conley, were more than adequate. Mooring was quite early, but was a winning factor at the close. Conley, for a debut, did more than what was expected of him. Yet there are Turner and Price waiting.
Wing half forwards, Garby - a recruit - and Way, were talented players. If Way kicked wretchedly early, his marking was brilliant and his kicking has improved. Garby played like a veteran. Yet it is here that Henfry must be included.
On the wings Hines was beaten by Billy Williams. His team-mate, Williams won handsomely. Wines dominated the centre. No one would drop Hines for Fitzgibbon even if 'Fitz' were available.
Full back Jim Jones was a clear winner over Bob Pratt and dashing away with the ball, turned play to the opposite wing and opened up the way to a brilliant passage that gave Carlton the goal which clinched the issue. Yet Vin Brown is the team's full back.
A pity Carlton can't enter two teams. It would save many headaches and heart burning"
(Sporting Globe April 24 p12) 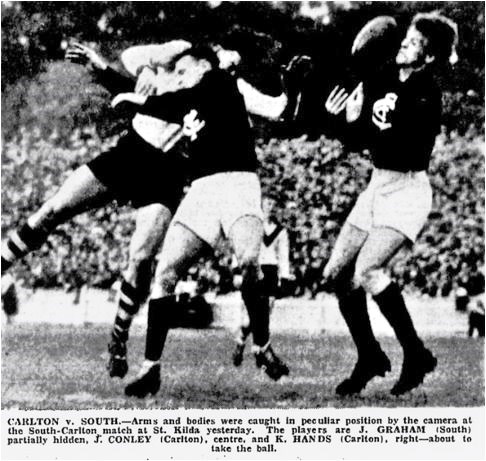 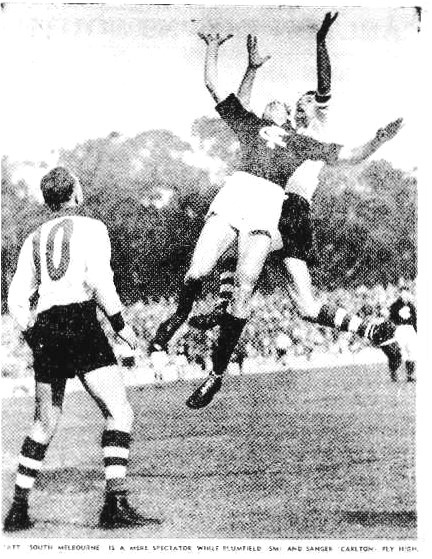 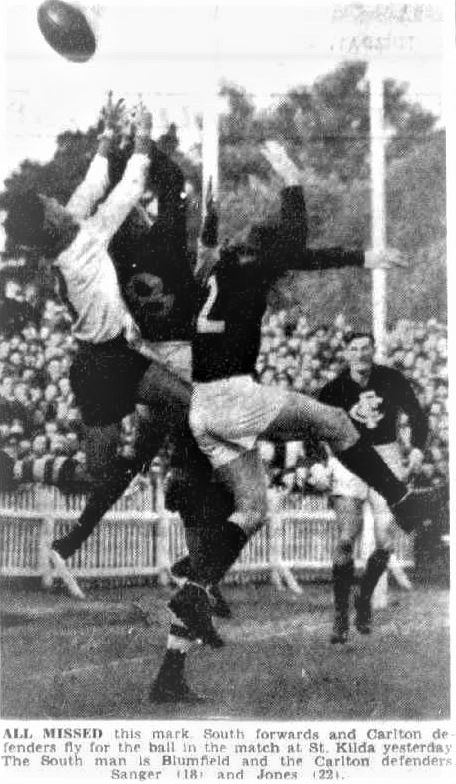 Debut : Ray Garby
Last Game : Albert 'Mick' Price
Score Records: This was the last of 10 consecutive wins for Carlton, one of the best winning streaks in our history