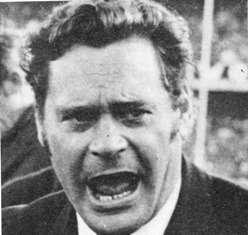 Two days before Christmas, 1964, the Carlton Football Club created a furore by announcing that it had signed Melbourne legend and six-time Premiership player Ron Barassi as captain-coach of the Blues for five years. The news rocked football to its foundations; at that time Barassi was to Melbourne what Lennon was to McCartney - or what sunshine was to summer. It was absolutely unthinkable that he would agree to play football for anyone else but the Demons.

Barassi was born to play for Melbourne. His father had represented the Red & Blue in 58 games - including the 1940 flag side - before he was tragically killed in action in World War II. When Ron's mother remarried and moved to Tasmania, he stayed on in Melbourne to further his promising football career and boarded at the home of Melbourne's great coach Norm Smith. Under Smith's guidance, Barassi became a champion. At 178 cm and 83 kg Ron was a solid type, not particularly blessed with an abundance of pure football talent. But he was tough, relentless and an inspirational leader who hated to lose any sort of contest. In Melbourne's golden era of 1953 to 1964, Ron played in no fewer than eight Grand Finals, winning six Premierships - two as captain. Wearing the same number 31 guernsey as his father, he was the games' outstanding ruck-rover, and its most recognisable figure. Meanwhile, at Princes Park the Blues were in turmoil. Torn by disputes and divided loyalties, Carlton had made the finals only five times since their last Premiership in 1947. It was time for swift and drastic action. A reform group of committeemen and influential supporters, headed by club dentist George Harris and former star wingman Laurie Kerr swept to power in an election landslide on December 7, 1964.

Harris became the new President. He immediately declared the position of senior coach vacant, and called for nominations. More than twenty hopefuls replied, including the incumbent, Ken Hands, but few were interviewed - because Harris had heard a whisper that Barassi was interested in spreading his wings into coaching. Harris quickly contacted Barassi and arranged a meeting. After long discussions, Ron expressed interest and promised a quick answer. The following morning he called back, saying; "I'm sorry. I've changed my mind. I can't leave Melbourne." Harris however, refused the rebuff. At seven o'clock the next morning he was back on the phone to the Barassi home. It took three hours more of earnest discussion, but when Harris did eventually put the phone down, Ron was the new captain-coach of the Old Dark Navy Blues. 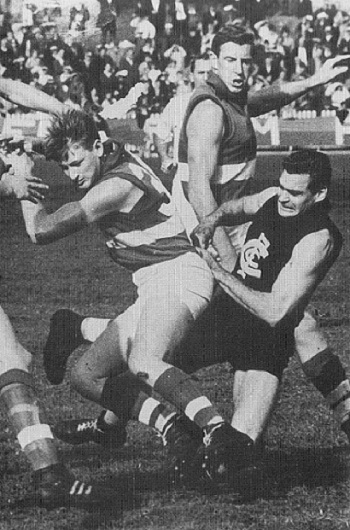 The news shook the VFL like never before. Author John Powers in his book The Coach wrote; "The move shattered many people's beliefs in the traditional concepts of sportsmanship and loyalty. Letters of protest poured into the papers and the Melbourne Football Club. Small boys wept." Leonie Sandercock wrote in Up Where Cazaly? ; ''It signified a critical point in the development of football in Melbourne, a turning point after which traditional notions of the game revolving around club loyalty meant less and less. It marked the beginning of the new professionalism, in which money and new challenges spoke louder than old loyalties." Carlton's tough back-pocket Ian Collins was just bewildered. He later said; "First of all, one committee was in, then they were all out. Then the coach, with whom I'd had four years experience - was suddenly removed, and a player I didn't like terribly much was fronting up to coach at Carlton. Such things don't happen very often. They were a shock to the system."

And indeed there were some shocks in store. Barassi was a fierce disciplinarian as well as a visionary. His coaching ethos revolved around eliminating errors in both the individual and the team. "Practice makes perfect is bullshit," he would say; "only perfect practice makes perfect." Most importantly, his methods worked, and the Blues improved markedly from tenth to sixth in 1966 (when Ron himself finished 3rd in Carlton's Best and Fairest award) to third in 1967. Then, after 49 games in Carlton's number 31 guernsey, Barassi retired as a player late in the '68 season, and guided the Blues into the Grand Final against Essendon from the coaches box. Before more than 112,000 people at the MCG, Carlton won a cliff-hanger by three points, and made Ron an instant Carlton legend.

In 1969 Barassi made a surprise comeback for one last game - in round 7 against his beloved Demons, to complete 50 matches for Carlton and ensure that any sons that came along in the future would be eligible to play for either the Blues or Melbourne under the father-son rule as it then stood. However, in an anti-climactic end to a great playing career, Barassi tore a hamstring in the third quarter and was coaching from the boundary line when the final siren sounded to herald a 30-point win to the Blues. Later that year, Carlton met Richmond in the Grand Final, and were were over-run in the final quarter by a fanatical Tiger team that was too quick and too committed for a Carlton side that gave it's all, but fell short when it mattered most.

Precisely twelve months later came Barassi's finest hour. It began at half time in the 1970 Grand Final, when Carlton trailed Collingwood by 44 points. With nothing to lose, Ron gambled on a bold tactic that he had nurtured for years - telling his team to play on at every opportunity, and to use handball to keep the ball moving at all costs. He also made some astute positional changes, and sent 19th man Ted Hopkins on to the ground in a forward pocket. In one of the greatest comebacks in finals history, Hopkins ran riot, kicking four goals as the Blues steamrolled Collingwood to win by 10 points.

Ron Barassi departed Princes Park following the 1971 season. In a VFL career in which he played 254 games and kicked 329 goals, he had worn our Navy Blue guernsey in 50 games, kicked 35 goals, and coached six seasons for two memorable Premierships. More importantly, he had swept away the complacent attitudes that existed before his arrival, and built the platform for Carlton's dominance in the next decade. After leaving Carlton, he made a brief comeback as a player for VFA Club Port Melbourne in 1972 (where, coincidentally, he was coached by Ian Collins) before hanging up his boots for good to become heavily involved in the media. 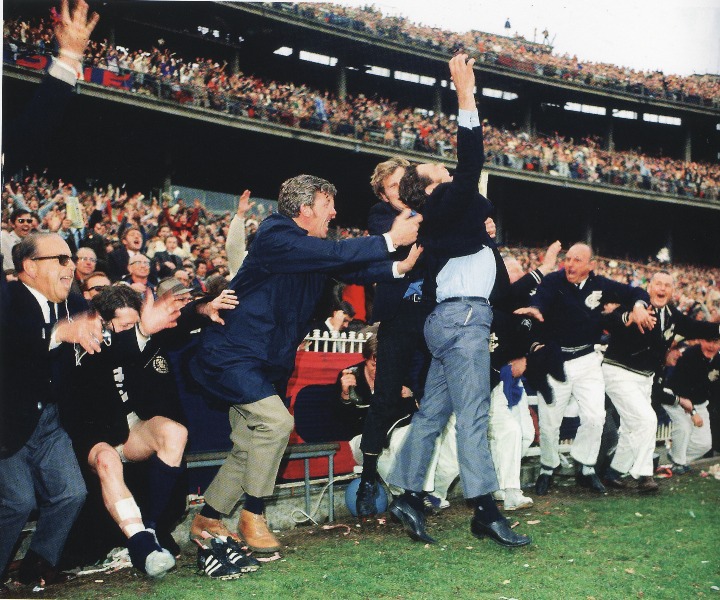 Two seasons later, he signed to coach North Melbourne in similar circumstances to those that had occurred prior to his arrival at Carlton. The 'Roos had had a shakeout, and were hellbent on success. Some clever recruiting paid off, and Barassi won two more Premierships at Arden Street in 1975 and 1977. In 1981 he returned to Melbourne at last, but during five years at the helm couldn't lift them to a flag. Long an advocate of Australian Football as a truly national code, Barassi next answered an SOS from the Sydney Swans in 1993 but couldn't lift them from the bottom rungs of the ladder in his three year stay. Despite limited success, one of his primary roles in Sydney was to lift the profile of the battling club , and it should not be overlooked that he blooded a lot of youngsters during his time in the Harbour City, many of whom helped them reach the 1996 Grand Final.

Still one of the most recognisable faces in the country, Barassi remains heavily involved in the game that has been his lifelong passion. Melbourne and North Melbourne have legitimate claims to his allegiance, but he will forever be revered at Carlton for that wonderful stroke of genius - one day in September, 1970.

Newspaper headlines for days, weeks! Photos of kids crying, letters to the newspapers, adults refusing to buy membership tickets if he left Melbourne. It was as if the fabric had been torn out of the Demons, and the coup-de grace came when Norm Smith was sacked, then reinstalled as coach a few years later.

Ron's father, Ronald James Barassi, was granted a permit by Castlemaine to play with Melbourne on May 7, 1936.

Corporal R. J. Barassi (aged 27) was the first VFL footballer to lose his life in WW2 - on July 31, 1941 - during Erwin Rommel's Afrika Corps' eight-month Siege of Tobruk in Libya, North Africa.
At the time, Ronald Dale Barassi was just 5 years and 5 months of age.