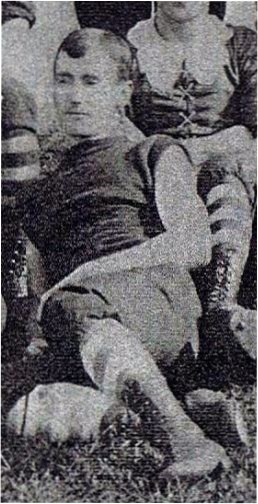 Bob Aitken played most of season 1883 in the Reserves. He was called into the Carlton senior team against Essendon on August 25 when the club sacked two players after a ruckus on the club trip to Maryborough. As a result of the sackings seven players resigned in defiance. The Blues hastily cobbled together a team including retired former club captain Jack Gardiner along with Aitken and other Second Twenty players. Incredibly Carlton won the match 3.11 - 1.10 Aitken was named in the Carlton 20 the following week against Melbourne at Brunswick Street, and again the week later against South Melbourne on Princes Oval.
He was also named in the Carlton 20 for the last two matches, Geelong at Geelong and Melbourne on Princes Oval.

Left; R. Aitken in the 1884 Carlton Football Club team photo against Adelaide.
He played in all four tour matches in Adelaide in June 1884.

1884 May 10
Aitken was named as an emergency for the season opener game against Melbourne.
Unknown if he took the field, only 15 players are mentioned in match reports.

1884 May 17
Aitken is named in the Carlton 20 squad for the match against South Melbourne on the M.C.G.

1884 May 31
Although named as an emergency Aitken is mentioned in match reports for the game against Essendon on the E.M.C.G.

Rob Aitken left Carlton for Melbourne early in the 1886 season, where he played 8 or 9 games and scored 5 goals.

1920 July 24
The Australasian (p19), in the golf section, mentions;
"I met another old Victorian in Bob Aitken, of Carlton Football Club days, of many years ago, who is dubbed by his friends as the "iron king" at golf."