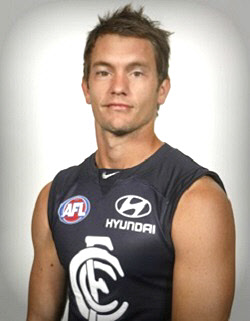 In 2003, in just his fourth AFL match, West Australian Richard Hadley was a member of the Brisbane Lions’ historic three in a row Premiership team. By then, he had been on the Lions’ list for three seasons, although the raft of injuries that was to dog him throughout his 66-game career at Brisbane and Carlton was already clouding his future.

Originally from the Willetton Football Club in Perth’s southern suburbs, Hadley had become a star midfielder for East Fremantle junior sides in 2000, before being drafted by the Lions. The Queenslanders were on the brink of greatness at that time, having assembled a list that would take them to four successive Grand Finals. Hadley made his senior debut for Brisbane against Richmond as an 18 year-old in round 3, 2001, only to break down at training the following week. He didn’t earn a recall for almost two years - until the eve of the 2003 finals. Three games later, he started the Grand Final from the interchange bench, and celebrated a famous victory over Collingwood – making the occasion even more memorable by kicking his first career goal.

The only injury-free year of Hadley’s career came in 2004, when Brisbane’s tilt at a fourth successive Grand Final victory ended in an emphatic defeat by Port Adelaide. Early the following season, Richard tore the anterior cruciate ligament in a knee, and the surgery and rehabilitation required cost him the best part of 12 months. He was back training again by 2006, before the same knee buckled again, and his career seemed to have ended on 41 games when Brisbane put him up for trade.

Meanwhile, Carlton was looking to bolster the club’s midfield, and believed that Hadley still had something to offer. So, in exchange for the Blues’ selection 52 in the 2007 National Draft, Richard shifted south to Princes Park, where he was allocated guernsey number 10. A mishap-free pre-season impressed Carlton coach Brett Ratten, and Hadley played his first game in new colours against Richmond on a Thursday evening at the MCG in round 1, 2008. His first victory in navy blue came against arch-rival Collingwood in round 4, but less than a month later he tore a groin muscle, and was restricted to only six senior matches for the season.

In a similar scenario in 2009, Hadley got through a testing pre-season to play a key role in Carlton’s 83-point drubbing of Richmond in the opening round of season, racking up 22 disposals, 12 tackles, 6 clearances and a goal. In the following week's victory over his old team Brisbane, Richard gathered 27 disposals at 85% efficiency, 6 tackles, 7 clearances and a goal, before playing his 50th AFL match the week after, in Carlton’s narrow defeat by Essendon.

Although his form tapered off mid-season and he was dropped back to the VFL for nine weeks, his form was so good during that period that he finished third in voting for the Northern Bullants Best and Fairest at the end of the year. He was back in Carlton’s seniors by round 18, but his season ended prematurely once more when he broke a bone in his arm during the first quarter of the round 21 match against Melbourne.

In 2010, Richard had to wait until round 10 before he earned a recall to the seniors, and his eighth game for the season – a pulsating Elimination Final against Sydney – was his first and last final in Carlton colours. After 25 matches for the Navy Blues, Hadley was delisted at season’s end, and headed home to finish off his career at East Fremantle.

Between 2011 and 2013, Richard served as vice-captain of the Sharks and played 49 WAFL matches. By then the toll on his battered body had become too much however, and he opted for retirement at the age of 30.