Bendigo born, Raymond Wilbur Hodgson Harry came to Carlton in 1933 from Latrobe Valley club Traralgon, and made just one appearance in the Old Dark Navy Blue - as nineteenth man - when Carlton thrashed Melbourne in round 17 at the MCG in late August. He was 24 years old, and wore guernsey number 25.

Another Harry - Carlton’s star full-forward ‘Soapy’ Vallence - steered through seven goals on that Saturday afternoon, while Carlton destroyed the hapless Fuchsias by 64 points. It is likely (as was the custom in that era) that Ray Harry would have at least been given a run late in the game, especially as the contest was all but over by half-time.

Later, Harry served his country for three years of World War II as a member of the Volunteer Defence Corps. Australia’s equivalent to England’s Home Guard, the VDC was a wholly volunteer force whose members manned the sea and air defences of ports, harbours, airfields and other vital military installations. He was eventually discharged in July, 1945, and for many years afterward lived near Ballarat.

"Gippsland Football League and Traralgon in particular - have suffered a big loss by the removal of Ray Harry to Burwood. Coming to Glengarry three and a half years ago, he threw his lot in with the Glengarry team in the Cowwar Association. He was the mainstay of the team which won two premierships. Last year he signed with Traralgon, and has been an ornament to the game ever since. Early this season he had a try out with Carlton. On King's Birthday, Tom Downes of Carlton visited Traralgon and Ray was induced to sign up with Carlton. A school teacher he was transferred. He is certain to make good in Melbourne Football League. Last season he was the best all round cricketer in the Traralgon Association and was in the premier Methodist team." (Weekly Times June 24 p65 1933) 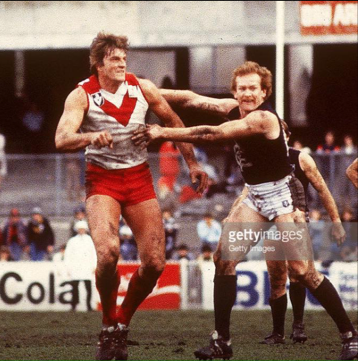