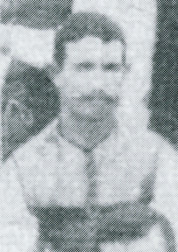 1890 The Age Wednesday 21 May reported that at the VFA Meeting on Tuesday night a permit was granted for R. H. Strong. The report did not mention which team Strong was leaving or going to. However, three days later on May 24 a player named Strong is included in the Carlton team squad to play Footscray on the South Melbourne C. G.
Strong was named in one of Monday's match reports.
Could be Bob Strong, The Australasian October 20 1945 (p23) in an article by "Old Boy" about former University players, mentions
"Bob Strong (a back for Carlton)."

Strong is pictured in the Carlton team photo taken in Sydney in 1890.

(The History of The Carlton Football Club, Brian Hansen, p79)

1893 Strong, on the wing, was part of a winning centre line against Williamstown on May 19.

Could be Dr. Robert Henry Strong who was born in Carlton in 1869. Aged 21 in 1890
He was educated at Carlton College and Melbourne University, went on to be a doctor and surgeon.
While in England he joined the British army during WW1 and became chief consultant at No.21 General Hospital at Ras-el-Tin Egypt and was awarded the OBE.
He died in Melbourne aged 79 on November 03 1948 (Obituary The Age November 05 p2)
Table Talk September 29 (p13) 1904 carried a photo and an article about Strong.
To read click here> http://nla.gov.au/nla.news-article145848332