Carlton were defeated by Essendon by 45 points - MCG. 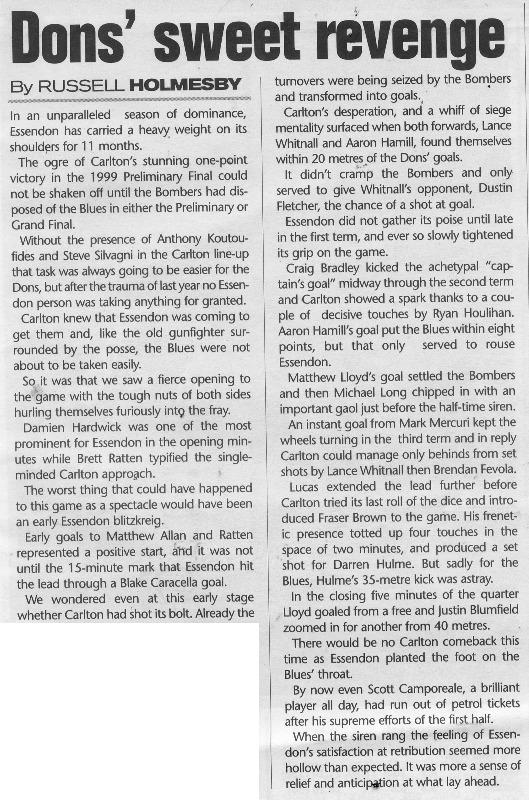 After trading goals early the Bombers, who on paper appeared to be the better team, began to get on top and took an 11 point lead at quarter time. They extended that lead by kicking the first 2 goals of the second quarter, before the Blues kicked the next 3 to draw within 8 points. But 2 late goals to the Bombers gave them back a 21 point lead at half time. A 6 goal to 1 third quarter would give the Bombers a 54 point lead at 3/4 time and only a miracle appeared likely to save Carlton.

They saved some face by outscoring Essendon 6 goals to 4 in the last, with the match all but over, to end up going down by 45 points. 3 of those goals came from Adrian Hickmott, who was probably the only effective forward on the day and had 20 possessions, while 2 were from Brendan Fevola, who came off the bench and showed his potential. Scott Camporeale and Brett Ratten worked hard all game, gathering 35 and 31 possessions and 2 and 1 goals respectively.

The Bombers had lost just one game all year- even better than Carlton's 1995 effort of just 2 losses for the year and seemed determined to make up for their shock loss to Carlton in the corresponding game the previous year. Carlton would have needed to be at full strength to have any chance of beating them but the loss of Anthony Koutoufides the last time these 2 teams met and then champion full back Stephen Silvagni the previous week made it virtually impossible.

From Carlton's perspective, after winning 13 games straight and appearing to be a real premiership chance, Carlton won just 2 of their remaining 7 games to finish the year as the third placed side. After finishing second at the end of the home and away season, a Grand Final berth seemed certain until the shock Qualifying Final loss to Melbourne, though they would prove no match for the all conquering Bombers the following week, who would easily win their 16th flag, to again be level with Carlton.