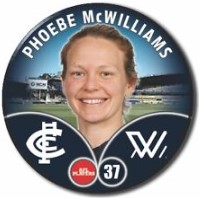 Phoebe McWilliams comes to the Club with a wealth of experience in AFLW as a key forward, already being a three-time club-leading goalkicker. At the state level, McWilliams was an All Australian in 2009 and featured in the St Kilda Sharks’ team of the decade. She was signed as a priority player by Greater Western Sydney before the 2016 NAB AFL Women's Draft and made her debut in Round 1, 2017 for the Giants. After 14 games and 14 goals with GWS she moved to Geelong for the 2019 season where she played a further 31 games for the Cats. The 36-year-old was Geelong’s leading goalkicker in Season 6 and will be a strong pairing alongside Darcy Vescio in the forward line.