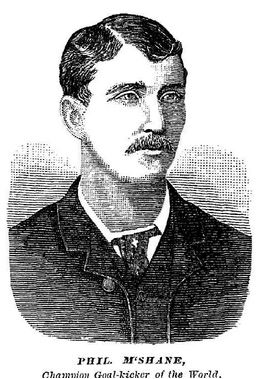 1890 Crossed from Geelong Football Club with his brother, Tom McShane.

P.McShane scored a goal in the victory over Footscray played at South Melbourne's Lake Oval 24th. May 1890

Phil McShane played the first five games in 1890 and scored a very creditable 9 goals.
He doesn't appear in any Carlton teams for the remainder of the season.
There was a report in one of the papers that he had been granted a transfer permit, but to where?

Six McShane brothers played for the Geelong Football Club in the VFA-VFL.

(The History of The Carlton Football Club, Brian Hansen p77,92)

1935 July 19
The Argus reported the death of Phil McShane.
He had been ill for sometime, he was aged 71 years.

Click below to read an article on the McShane family from The Argus June 23 1934.
National Library of Australia.