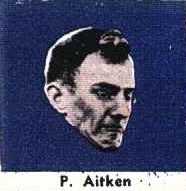 The Argus 28 March 1955, reporting on Carlton's practice match said; "Aitken was liked to Essendon star Bill Hutchison in his movements, and he, too, looked likely to have a future in senior football."

Peter was a postal worker, The Argus March 30 1955 reported that he had been transferred to the Carlton Post Office.

Aitken played 11 games for the Blues in Season 1955, kicking 7 goals. He came from Kyabram.