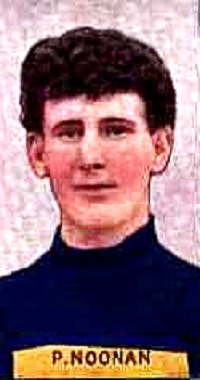 A rather nomadic footballer during the first years of the Victorian Football League, Patrick Thomas “Paddy” Noonan was a feisty customer as well as an often brilliant player. After starring for Fitzroy in their Premiership season of 1898, he defected to Carlton three years later, but found little success in a two-season stay.

Noonan was born in the district of Hotham (North Melbourne) in 1875, and began playing with Fitzroy in 1896 – the year before the Maroons and seven other clubs broke away from the VFA to form the VFL. A tearaway rover described at the time as “full of pluck,” he was a member of Fitzroy’s first Premiership team in 1898, but was left out of the 1899 Grand Final side for unexplained reasons.

In 1901 Paddy turned up at Carlton and was immediately included in the senior line-up. The Blues enjoyed little success over the next two seasons however, and after just two wins in 19 matches, Noonan decided to return to the VFA as captain of North Melbourne. He enjoyed immediate success with the Shinboners, leading them to an emphatic victory over Richmond in the 1903 VFA Grand Final, then went back-to-back when Richmond refused to contest the 1904 decider because the Tigers objected to the Association’s choice of field umpire. North Melbourne took to the field that afternoon with Noonan in a forward pocket, and was awarded the flag by default.

Paddy crossed to Williamstown as captain-coach in 1907 and took them to the top of the VFA ladder late in his first season – only to fall out with the club committee and resign before the finals. Under caretaker coach Ted Alley, the Villagers then went on to win the Premiership with a decisive Grand Final victory over West Melbourne.

By 1909 Noonan was back at North Melbourne, where he resumed the captaincy in his last season on the field. From then on he served the Shinboners in a variety of administrative roles, and even stepped back into the coaches box in 1929 when the incumbent, Charlie Tyson was sacked mid-season. Paddy coached the Northerners in 13 games, but managed just one win and was happy to hand the job over at season’s end.

He remained a familiar figure at Arden St until he passed away on the 27th January, 1935, aged 59.

At a gathering for the North Melbourne Junior Football Club held at the Mechanic's Hall, Errol Street, on Saturday 01 April 1911, Councillor John Gardiner proposed a toast to the Victorian Junior Football Association.
“Cr. Gardiner said he was sorry that their old friend “Paddy” Noonan was not able to be present that evening to give the toast, but he regretted to say that a family bereavement was the cause of his absence. He remembered Paddy when he played for Carlton, saying that he was always a good fellow, and a true comrade. (Applause).”
(North Melbourne Courier, 07 April 1911)