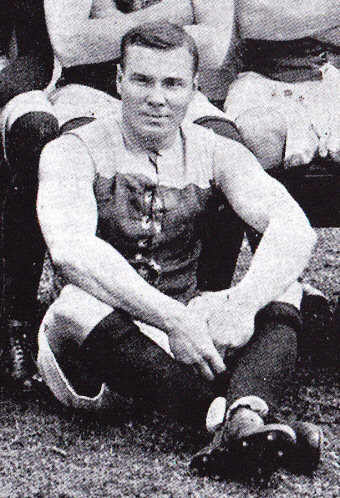 
Norman Childers ‘Hackenschmidt’ Clark was one of the prominent figures of the Carlton Football Club in the early part of the 20th century. A champion player whose falling-out with coach Jack Worrall in 1910 had ramifications for both men, he played a vital role in each of the Blues’ first five Premierships.

While still a teenager, Clark was playing senior football for South Australian club North Adelaide when he won the 1899 Stawell Gift – then and still now, Australia’s most prestigious professional sprint race. In 1900 he used his electrifying pace off half-back to help the Roosters to their maiden SAFA Premiership victory over South Adelaide, and two years later was at centre half-back when the same two sides met in the Grand Final with the same result.

In 1904 Clark moved to Stawell with the aim of winning another Gift, and joined the Stawell Football Club. Midway through 1905, he stood out in his second representative match for South Australia against the VFA in Melbourne, and Carlton coach Jack Worrall was just one of many VFL identities watching on. The pair met after the match – not for the first time – and within weeks Clark was in Melbourne training with the Blues.

By then Clark was a mature 26 years old, powerfully proportioned at 170 cm and 84 kg. His new team-mates were so impressed by his physique, they nick-named him ‘Hackenschmidt’, after a famous European body-builder and wrestler of the time; Georges Karl Julius Hackenschmidt. The name caught on, and as it became more widely known, Carlton supporters began to shout “Hacky! Hacky!” as he took off on his scorching runs from defence.

Clark played his early games at Carlton in his customary half-back role, before Worrall asked him to drop back into a pocket. Alongside Les Beck and Doug Gillespie, Clark formed a rock-solid last line of defence for the Blues in a glorious run of three successive Premierships in 1906, ’07 and ’08. Blisteringly quick, skilful and courageous, he was adored by Carlton’s supporters and respected by every opponent for his honesty and fairness.

So it came as a huge surprise when Clark led a revolt of the Carlton players against coach Worrall in 1909. Norm and his team-mates had been playing before ever-growing spectator numbers for four years, while their pay packets had essentially remained the same. They wanted a bigger share of the spoils of the game’s booming popularity, but they felt they didn’t have the full support of the coach – which indeed was the case.

Trying to assert his authority, Worrall dropped Clark for the first two games of the 1909 season. Many senior players then signed a letter of resignation, and the club committee could do nothing else but reinstate Clark. What’s more, they paid him for the two games he’d missed, and agreed to a pay rise for all. This left Worrall in an untenable position. He resigned later that year and was replaced by Fred Elliott as captain-coach. Carlton made the Grand Final for the fourth successive year, but lost a thriller to South Melbourne by just two points.

Appointed coach of the Blues in 1912, Clark retired as a player midway through the year, and stepped down in favour of Jack Wells prior to the next season. He spent 1913 as coach of VFA club Brighton, then returned to Princes Park to take over again from Wells in 1914. In August of that year, Australia became embroiled in the tragedy of World War 1. While momentous events unfolded in Europe, Clark guided the depleted Blues throughout the war years, winning further Premierships in 1914 and 1915.

In 1918, he moved on to coach Richmond, and took the Tigers all the way to the Grand Final in 1919, only to fall to Collingwood. He was back at Princes Park yet again in 1920. This time, he held his position until round 7, 1922, when he was replaced by Horrie Clover.

When he finally retired from football after coaching North Melbourne in 1924, followed by two seasons at St Kilda in 1925-26 and a short stay at VFA club Prahran in 1929-30, Clark could look back on an enviable record of five VFL Premierships in a career spanning 25 seasons. Furthermore, he had played in unsuccessful Grand Final teams in 1909 and 1910, and coached the Blues and Richmond into flag deciders in 1916, 1919 and 1921.

A report in The Herald December 15 1943 (p8) said he was seriously ill in St Vincent's Hospital.
A true champion of the Carlton Football Club, ‘Hackenschmidt’ Clark became the thirteenth inductee into the Carlton Hall of Fame in 1989. He had passed away in Melbourne on Boxing Day, 1943, aged 65.

Footnotes :
1924 Norman Clark played in an old players match at the M.C.G. on September 26.

From The Mercury (Hobart) December 28. 1943;
Melbourne, Monday - Mr. Norman Clark, a former runner and footballer has died aged 65 years.
Born in Adelaide, Mr. Clark moved to Victoria in his youth and won the Stawell Gift in 1899. He later joined the Carlton Football Club, where he gained the name of "Hackenschimdt" because of his dashing and determined style.
He was a member of Premiership sides in 1906-07-08, and played in several interstate games before retiring in 1912. He coached the team to Premierships in 1914-15 and after coaching Richmond in 1919, he returned to Carlton to be coach in 1920 and 1921.
He was coach of North Melbourne in 1924, and of St.Kilda in 1925-6, and Prahran in 1929."

In 1966, Norman Clark’s son Adrian was a senior official and Association delegate at Frankston Football Club when the Dolphins were admitted to the VFA.

Clark’s grandson David was 16 years, 11 months old when he played his first match for Frankston in 1970. 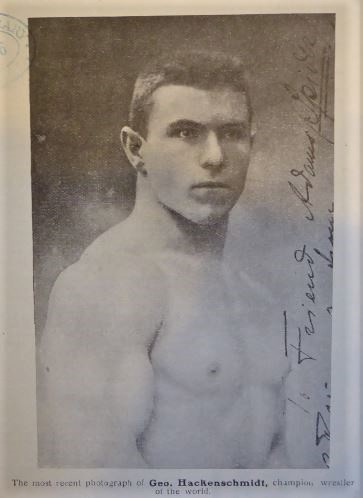