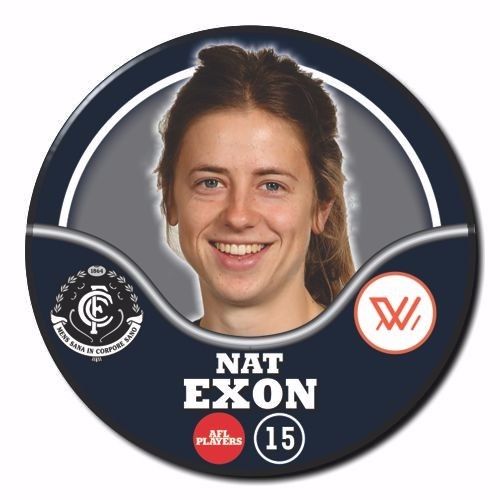 Carlton’s midfield has gained plenty of pace, with Nat Exon joining the team as rookie for 2017. After dabbling in soccer and middle distance running for a number of years, Exon returned to football in 2016 and made an immediate impact. She joined the Darebin Falcons – the most successful women’s football team in Australia – and played a key role in its fourth consecutive VFL Women’s Grand Final victory in September. Women’s senior coach Damien Keeping says Nat’s elite outside run and kicking ability will strengthen the Blues’ midfield. Exon would head to the Brisbane Lions for two seasons and play 14 games and kick 6 goals. Exon would then head back to Victoria and join St Kilda for the 2020 season. Exon then signed on with the Saints for one more year on 30 June 2021, tying her to the club until the end of the 2021/2022 season.


Blues lose Exon for season
Carlton women’s player Nat Exon will be sidelined for the remainder of the AFLW season, after breaking her ankle in the Round 5 victory over the Western Bulldogs last Saturday. Senior coach Damien Keeping said it was a disappointing loss for the Blues, however was adamant the Blues would continue to support Exon throughout her recovery. “Nat’s injury was really disappointing for the Club. She’s progressed through the program, committed to it really well and had a great passion for playing for the jumper,” Keeping said. “The break to her ankle will see her start the rehab process straight away. “We’ll get the Club’s resources around her and she understands the path that she’s on now and we’ll get her right. I can’t wait to see her back in the navy blue next year." The injury has opened up a place on the list for top-up player Jordan Ivey, a 21-year-old midfielder from Lake Wendouree. Ivey will come into the side as Carlton’s second top-up player this season, following the inclusion of Tahni Nestor, with Keeping welcoming the exciting new talent. “This injury has presented an opportunity for Jordan Ivey to play her first AFLW game,” he said. “Jordan comes from Lake Windouree’s local club, where she won the best and fairest recently. She’s a running midfilder with a strong left foot on her and we’ll be thrilled to see Jordan wear the navy blue this season." Ivey will debut for the Blues in this Friday’s Round 6 clash against Fremantle at Domain Stadium. - Grace Phillips, Carlton Media March 9, 2017