A representative from County Cork, who tried out as a Rookie 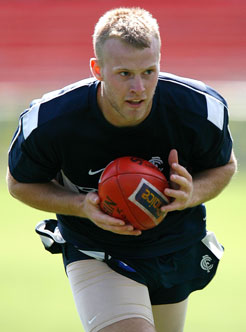 Michael Shields was offered a 2 year International Rookie contract for the 2008 and 2009 seasons.

Michael was the third player recruited from County Cork since 2003. Michael had had a very good career with Cork, winning 3 under 21 Munster titles with Cork. In 2006 they were beaten in the final by Mayo however in 2007 they went one step further by beating Laois in the final. The move of Shields to CHB in the closing 10 mins turned the game for Cork. He played on the Cork Senior Football Team in 2006 & 2007. In 2006 he was played on HBF whilst in 2007 he was a corner back or full back. Cork made the All Ireland Final in 2007 where they lost to Kerry. Michael won a Munster senior medal with Cork in 2006. In 2007 he was part of the Munster Interprovincial team that lost to Ulster in the Railway Cup Final.

Midway through season 2008, Shields decided to go back home to Ireland and stop pursuing an AFL career.