23rd captain of the Navy Blues. 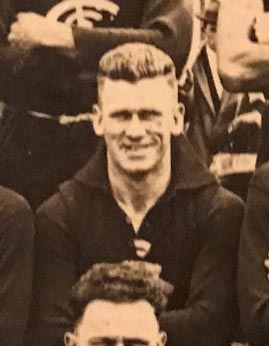 Born in neighbouring Brunswick, Maurie ‘Mocha’ Johnson was a fiercely competitive, versatile player for the Blues throughout his nine seasons in Navy Blue. Perhaps one of the first ruck-rovers, he was remarkably quick for his size, and renowned for his long and accurate drop-kicking on the run.

Mocha played junior football at VFA club Coburg, before crossing to rivals Brunswick where he made his senior debut in 1926. Later that year, after just one impressive season with the ‘wicks, Carlton came calling and Mocha agreed to join the Blues. Carlton saw him as a half-back flanker at first, but as his career progressed he developed into a true utility; a tough, durable customer who could play anywhere. Even so, he always preferred the relative freedom of the second ruckman’s role.

The high point of Mocha’s career came in 1932, when Carlton topped the ladder and went into the finals as favourites. Richmond’s 25 point victory over the Blues in the Second Semi-Final was a reality check, before the boys from Princes Park pulled things back together with a clinical carve-up of Collingwood in the Preliminary Final. Champion full-forward ‘Soapy’ Vallence kicked 11 goals that day, and Mocha Johnson was Best on Ground as the Blues slaughtered their fiercest rivals by 75 points.

Still on a high after that crushing victory, Carlton looked forward to their Grand Final rematch with Richmond with confidence. The game was a thriller from the opening bounce as both teams went hard at the ball, and if necessary, the man. In a game not short of highlights, Mocha brought the Blues fans to their feet in the third quarter when he gathered the ball deep in defence and charged forward in a jinking, bouncing solo run that took him to half-forward, where he speared a neat footpass to the leading Vallence. ‘Soapy’ then kicked truly for one of his five goals, but even that fine effort wasn’t enough to vanquish the determined Tigers. Richmond won their third VFL flag by nine points in an epic match.

That titanic struggle proved to be Mocha Johnson’s only chance at Premiership glory, but he did have the honour of captaining his club in 1934. The Blues finished fifth that season on percentage and therefore missed the finals. In ’35 Mocha passed the captaincy on to Charlie Davey, and reverted to doing what he did best - playing hard, accountable football.

Johnson’s career at Princes Park came to a premature end after only six games of the 1936 season. The exact circumstances are unclear, but it seems that Mocha had a serious falling-out with new coach Frank Maher, and the situation deteriorated to the extent that one of them had to go. Mocha walked out and joined South Melbourne, where he proved to be as valuable to them as he had been to the Blues. South asked him to play forward more often, and he responded with 27 goals in his 19 games in 1935-’36.

Despite the circumstances of his departure from Princes Park, Mocha Johnson was undoubtedly one of the great Blues of his time; a player who gave the game a glimpse of its future, while personifying the basics of skill, courage and attitude.

Round 11, 1934 Maurie Johnson received a severe cut to the side of his shin. The cut was nearly to the bone and occurred during the latter stages of the third quarter against Essendon. Maurie recieved 6 stitches and the leg was strapped. Despite being urged not to go back on he resumed playing in the final quarter.

The Age said;
"After the game he was treated with anti tetanus serum, as the soil of the Carlton oval is particularly dangerous as regards tetanus".