Matthew Brian Hopkins was taken by the Blues with its second and final pick in the 1993 National Draft (No.48 overall). Hopkins was recruited from West Adelaide in the SANFL as a winger come half back-flanker.

Unfortunately for Hopkins, he seriously hurt his knee in a pre-season practice match at Skinner Reserve Sunshine and never played with the Blues again. He went back to SANFL to get over the injury but ended up staying there.

Hopkins who was born in Glenelg came up through West Adelaide Juniors through to the senior team where debuted in 1993 as a 19 year old. He would play 4 games in his debut season, they must have been impressive to strike Carlton's interest in him. He did not play again for West Adelaide until 1996 where he added a further 12 games. 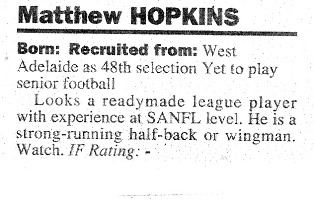