From Port Melbourne with purpose. 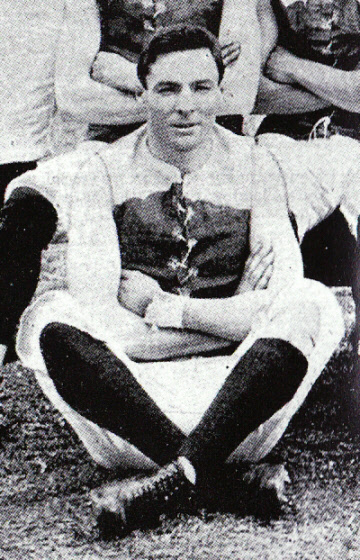 Martin Gustaf Gotz was a vigorous, versatile, skilful and controversial member of four consecutive Grand Final teams for Carlton from 1907 to 1910. Two of those deciders were famous Premiership victories – in fact, the second and third in Carlton’s hat-trick of flags in 1906, ’07 and ’08. But for an injury in 1906, Gotz would have played in all three.

Like many talented footballers of his era, Gotz was something of a football nomad. He began his senior career at Port Melbourne in the VFA in 1902, then was lured to Western Australia, where the gold boom of those years meant that good jobs and ‘bonuses’ were freely available to quality players.

After a season with Perth Football Club, he switched camps to East Fremantle in 1904 and played as a rover in their Premiership victory that year (defeating Perth). In 1905 he returned across the Nullarbor to rejoin Port Melbourne (the place of his birth), from where he was invited to Princes Park for the following season.

Essentially a rover, but later to shine in defence, Gotz was elusive, a strong mark for his size and a driving drop kick on the run. He was also something of a belligerent character out on the ground, where he refused to be intimidated. When he pulled on the Carlton guernsey for the first time in round one of 1906 - against Melbourne at Princes Park - the Blues won by 27 points and took their first step on the road to our first glorious Premiership.

In September that year, after a string of impressive games, Gotz was heading for Best on Ground honours before he was injured in Carlton’s tough semi-final win over Collingwood. The following week, he could only watch from the grandstand as his team steamrolled Fitzroy to claim the 1906 flag, and send thousands of Blues supporters into rapture. The story of the game and its aftermath is detailed in the Blueseum feature story 1906: The First of Many.

While his football ability was obvious, Gotz’s temperament came under close scrutiny the next season, following Carlton’s bruising round 15 clash with South Melbourne at the Lake Oval. South won a violent game by 17 points, and a number of spiteful, behind the play clashes made headlines.

Afterward, South’s enforcer Bert Franks, and three Carlton players; Jim Marchbank, Fred ‘Pompey’ Elliott and Martin Gotz, were reported on a string of charges. To the surprise of many, Gotz was cleared, while the other three were all found guilty and given tough penalties ranging from six months, to a full year’s suspension. Capitalising his good fortune, Gotz continued playing good football into the 1907 finals and - somewhat ironically - capped off a memorable season with a solid game at half-back in Carlton’s gratifying five point Grand Final victory over South Melbourne.

The Navy Blues’ unprecedented third flag in a row in 1908 came at the culmination of a dominant season. Beaten just once throughout the year (by our Grand Final opponents Essendon), Carlton exacted revenge in the best way possible – with victory over the Same Olds on that one day in September - albeit by just 9 points. Gotz’s second Premiership in a row topped off a fine year for the rugged utility, who played on a half-forward flank on Grand Final day and did well again.

A fourth flag on the trot seemed likely to in 1909, even when club mentor Jack Worrall stepped aside and was succeeded by Fred ‘Pompey’ Elliott as playing coach. The team responded positively to Elliott’s more relaxed approach, and on October 2 the Blues marched into another Grand Final as favourites against arch-rivals South Melbourne. Playing on a half-back flank, Gotz was one of Carlton’s prime movers throughout the first half of the match, before a collision forced him off the field with a damaged ankle. His absence diminished the team’s drive off half-back, and the Blues were beaten by just two points.

Season 1910 was to be a year of tumult and lost opportunities for the Blues. Ructions among the committee triggered the resignation of four star players before the season began, yet the team still finished two wins clear on top of the ladder. Then, just before the second semi-final, three more Blues were dropped when allegations of bribery rocked the club. Carlton lost that match to South Melbourne, and they in turn lost to Collingwood in the Preliminary Final. This meant that Carlton, as minor premiers, would play Collingwood for the 1910 Premiership.

Carlton were forced into a number of positional changes for that Grand Final, including the move of Gotz from defence onto the ball as first rover. The game was described as ‘a war’ all day, but Collingwood gained the upper hand when Carlton’s champion centreman Rod McGregor left the ground with a wrenched knee. At the bell, they had beaten the Blues by 14 points.

More controversy involving Gotz erupted in May, 1911, when Carlton met University at the MCG. In the third quarter of the match, the Students’ Vic Trood had just kicked the ball downfield when he was hit hard by a charging Marty Gotz. Trood was stretchered from the field and for a time, grave fears were held for him. The field umpire said he didn’t see the incident, and so was not prepared to take any further action.

Outraged, University notified the VFL that it would not play Carlton again that year unless certain players were dropped, then promptly laid a civil charge of assault against Gotz. While the VFL anxiously awaited an outcome before becoming involved, Gotz was found guilty and fined ten pounds, or two months jail in default. He immediately appealed the decision, and both he and the league breathed a sigh of relief when his conviction was overturned. Happily, Vic Trood made a full recovery and went on to play for another three seasons.

Gotz resumed his place in the Carlton team, and played on a forward flank in the 1911 first semi-final defeat by Essendon. In that match, he became the first Blue to officially wear the number 12 club guernsey. Despite his court appearances and the disruption they caused, Marty’s season of 16 games and 15 goals had been one of his best.

However, to Carlton’s dismay, Gotz was in the news again in 1912, when the Blues denied his surprise request for a clearance to St Kilda. He announced that he was standing out of football, and carried out his threat (made privately to the Carlton committee) that he would reveal to the public details of illegal payments he had received throughout his career at Princes Park. But Carlton stood firm, and eventually Gotz came back to Carlton for one more year.

Wearing guernsey 24, he played 11 games and kicked six goals in 1913, as the Blues faded to sixth spot on the ladder. It was the only one of Marty’s seven seasons at Carlton in which he didn’t play finals football, but he wasn’t quite finished with the game.

In 1914 Gotz’s football journey completed a full circle when he donned the red and blue of Port Melbourne once more, to play one last season where he played his first. The Borough missed the VFA finals, and Martin bade farewell to the game. He passed away on the 13th August, 1967, aged 84.

Gotz was listed as wearing No's 7 and 25 during the 1912 season but he didn't play any senior football with the Blues that year.

This morning Martin Gotz the well known Carlton footballer, was jammed in a goods lift on the ground floor of the Robur tea warehouse. He was about to enter the lift when it moved upwards. He fell, and his body was caught between the floor of the elevator and the top of the door. Another employee heard his screams and immediately stopped the lift. Gotz escaped with a few abrasions and bruises.
(Riverine Herald, 25 December 1912)

The Herald Jan 24 1934 reports Carlton has signed Martin's son Bruce Gotz a local junior, aged 20 and a 6ft1in centre half forward. Carlton president Dave Crone has secured employment for him