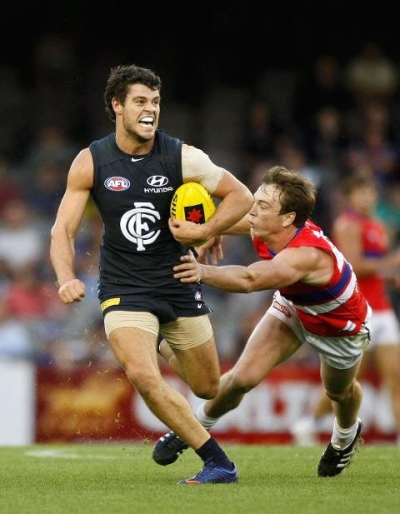 
Earmarked as a potential top-liner at an early age, Tasmanian Marcus Davies was drafted by the Blues with selection 43 in the 2009 National Draft from North Hobart. Speaking on Carlton's club website at the time, Recruiting Manager Wayne Hughes summed up his potential this way; “Tassie boy - centre half-back in the nationals, 188 cm running player - I think he holds the state record for 3000 at schools. Good user of the ball, breaks the lines, can play on smalls and talls with his running, so he could give us dash out of defence.”

Davies spent most of his first year of 2010 in the red and white colours of the Northern Bullants. By July however, he was pressing hard for senior selection, and the match committee eventually gave him an opportunity when Carlton and Essendon kicked off round 19 in a Friday night blockbuster at the MCG. Assigned Carlton’s number 31 guernsey (worn previously by greats in Tom Alvin and Ron Barassi) Marcus was named in the starting line-up at half-back, but began the game on the bench. After soaking up the excitement as the Blues took an early grip on the game, he was eased into action while Carlton smashed the Bombers in the last quarter to win by 76 points. Jeff Garlett was a star up forward for the Blues that night, with 6 goals.

That September, Davies played finals football in only his fifth senior game, when Carlton met Sydney in a classic Elimination Final at the Olympic Stadium. In a spine-tingling contest, the valiant Blues lost by 5 agonising points, and Marcus was quietly effective off the bench. A few short weeks after that bitter disappointment, the National Draft brought another batch of new faces to Princes Park. Among them were two hardened defenders in Jeremy Laidler from Geelong, and Nick Duigan from Norwood, so competition for places in Carlton’s defence in 2011 intensified, and Davies found himself squeezed out of the senior team in very similar circumstances to the previous year.

Forced to wait almost as long again (until round 18) for his senior recall, Marcus came off the bench and helped his team to another huge win over the Bombers on a memorable Saturday night at the MCG. In a spectacular effort by the Blues, small forward Eddie Betts kicked 8 goals, and Carlton shot down the Bombers by 74 points after “Sky” Walker took one of the greatest high marks ever seen, perched on the shoulders of Essendon ruckman Jake Carlisle.

Three weeks later, Davies enjoyed a memorable moment when he kicked his first AFL goal during Carlton’s round 21 victory over the Fremantle Dockers at Subiaco Oval. On the ground from the first bounce, he was awarded a 50-metre penalty in the opening term, and coolly slotted the goal from 35 metres. From there, he stayed in the side, and took part in two more finals; a record-setting 62-point Elimination Final victory over Essendon, and a devastating 3-point loss to West Coast in a Semi Final thriller at Subiaco. With the foundations of a good career in place, Marcus had some exciting opportunities ahead, but his 2012 season – like that of his team as a whole – was about to be wrecked by injury.

Having completed a full pre-season program, Davies was running into form in the VFL with the Northern Blues when an opponent fell into his back during the second round match against Williamstown and severely damaged a shoulder. He played out the game under considerable difficulty, but later underwent surgery and took 13 weeks to complete his recovery. As a consequence, he couldn’t be considered for senior selection until late July, and managed just two games for the season. The only small compensation for Marcus was that they turned out to be two of the most exciting matches of the year – a dramatic 4-point win over Richmond in round 18, and a gallant, frustrating loss to Sydney a week later.

Prior to beginning his fourth pre-season in 2013, the young Taswegian was philosophical about his misfortune when he said; “It’s been hard to watch sometimes. You only wish you were out there to help the team, but these are the cards you’re dealt.” Sadly for Marcus, his troubles were not yet over.

Under Carlton’s new senior coach Mick Malthouse, Davies began the year on a positive note, and when Carlton and Collingwood met in another blockbuster at the MCG in round 2, Marcus played his 17th senior game on his 22nd birthday. Although his team lost by 17 points, Davies did enough to hold his place in the side for round 3, when Geelong kept the Blues winless after another tight contest on the following Saturday night at Docklands.

However, Marcus finished that match sitting on the sidelines with a minor hamstring strain, and while he recovered full fitness within a fortnight, from then on wasn’t able to claim back his place in the senior side. Once more, he played the rest of the year with the Northern Blues.

After Carlton’s first season under Malthouse ended in a Semi Final defeat by the Sydney Swans, the club’s match committee was quick to sharpen their axe and prune the playing list. Davies was one of a number of players out of contract, and in late September, he was told that his services were no longer required.

In 2014 Davies played for VFL team Port Melbourne, at the conclusion of the season he headed back home to Tasmania after signing a three year contract with Kingborough Football Club in the TSL. Former Blues teammate Mitchell Carter would also line up at the Kingborough Tigers in the 2017 season.