Tragedy on the training track.. 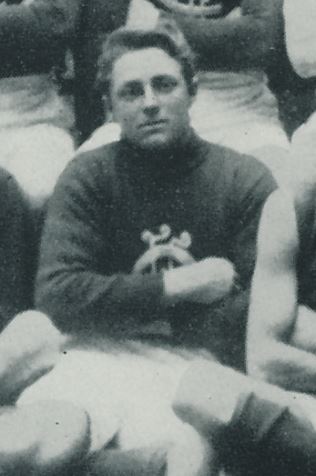 A brilliant, yet volatile rover at Carlton for five seasons, Lyle Downs was at the peak of his career when he collapsed and died of a heart attack, shortly after completing a training run at Princes Park on July 7, 1921. Although doctors had been warning him for three years that his heart wasn’t functioning as it should, Lyle chose to continue enjoying the game he loved, with tragic consequences.

Four years earlier - after being recruited by the Blues from Clifton Hill Juniors - Downs had played in a draw in his senior debut against Fitzroy at the Brunswick Street oval in round 1, 1917. Wearing guernsey number 28, and sharing the roving duties with Viv Valentine, he kicked his first career goal, and wasted no time in establishing himself in a powerful Carlton side.

Barely three months later, Lyle experienced the electric atmosphere of finals football for the first time when Carlton and Fitzroy faced off in a Semi Final at the MCG. As was customary at the time, both sides went hard at the man with the ball throughout the match, meaning that there were constant flare-ups. Although he was only slightly built, Downs was a feisty sort of character who wouldn’t accept being roughed up without retaliating – and this game was no exception.

Fitzroy won a tough contest by 9 points to end Carlton’s finals hopes, while Downs was quite superb in defeat and was clearly Carlton’s best. Even so, he was one of four players - three Blues, and one from Fitzroy - who were placed on report by the umpires. The tribunal came down hard on all the culprits, and Downs was suspended for 10 matches when he was found guilty of attempting to kick Fitzroy's Frank Strawbridge. In turn, Strawbridge was outed for three games for retaliating.

Late in 1918 – about the time that he completed his sentence and came straight back into Carlton’s seniors – doctors first warned Downs that his heart wasn’t right. They reminded him regularly throughout the remainder of his career, but Lyle brushed their concerns aside, and underlined his value to the Blues by starring again when Carlton narrowly lost another Semi Final to South Melbourne by a bare five points.

Over summer, Downs showed that he was almost as adept at cricket as he was at football when he featured in the sporting headlines as a punishing wicketkeeper-batsman with the Carlton Cricket Club. Before his untimely passing, Lyle was Carlton’s regular first grade keeper, with innings of 109 not out, 73, and 67 in the 1919-20 season. It was also Downs’ friendship with future champion Horrie Clover, and their mutual love of both games, that first brought Clover to Princes Park.

In 1919, Carlton fell at the first hurdle in the finals for the third year in a row when Collingwood tipped the Blues out by 18 points. Rod McGregor, Charlie Fisher and Lyle Downs were the standout players for the losers. Early the next season – in round 8, 1920 – Lyle’s younger brother Johnny played his one and only senior game for Carlton on a wing against Collingwood at Victoria Park. The home side proved too good however, and the Downs boys were left lamenting a 19-point loss.

Collingwood continued to feature in Lyle’s story following the return match at Princes Park in round 17, when he was booked again by the field umpire for tangling with Magpie rookie Les Lobb. A few days later at the tribunal, Downs was found guilty of striking, and suspended for eight matches – ruling him out of the 1920 finals, and making it considerably less difficult for the Pies to defeat the Blues by four goals in the Preliminary Final.

By round 9, 1921, Downs was back in action on the field when his team exacted sweet revenge on the Magpies with a good win at Princes Park, and assumed outright leadership of the VFL ladder. With Clover hitting his straps at centre half-forward, and quality players on every line, the Navy Blues were looming as a definite flag threat – until the following Thursday night, when Lyle collapsed in the change rooms at Princes Park, and died of a massive heart attack.

The shock of Downs’ sudden death cast a pall over Princes Park, and an outpouring of grief for a for a sporting life cruelly cut short was never more amply on show than during his funeral on the following Sunday afternoon. Thousands lined the streets as the cortege made its way to the Melbourne cemetery, led by approximately 800 members of the Carlton Football and Cricket Clubs marching in solemn silence. The Presidents of the respective clubs; Alderman John Gardiner and Robert Heatley were the chief pallbearers, along with Carlton players Horrie Clover, Jack Greenhill and Harry Haughton.

Many people believed felt that Downs’ absence was a major factor in Carlton's defeat by Richmond in the 1921 Grand Final. That being so, Lyle’s legacy was to live on at Carlton in the shape of his equally tenacious (and equally combative) cousin Tommy Downs, who came to Carlton in 1927 to play 56 games amid regular trips to the tribunal. Another cousin, Albert Downs, played a single game with Collingwood in 1933.

"The dramatic death of Lyle E. Downs in the Carlton dressing-room on Thursday evening, July 7, created a most painful sensation. On the previous Saturday, in the match against Collingwood, he had received a severe bump on the shoulder, which had not thoroughly recovered during the week. He was in the act of getting the injured shoulder massaged when he suddenly fell forward and died without speaking. Two years ago, acting on medical advice, Downs ceased playing, as his heart was over-strained. However, he played again in the latter end of the season, apparently quite sound in health. Evidently his heart had not thoroughly recovered. Downs was a splendid all-round cricketer and footballer. Short, sturdily built, cool, resourceful, quick, and game, he was Carlton's first rover for years. He shirked nothing, and was also a dangerous forward. In cricket he was a plucky and resourceful batsman, a splendid field, and capable wicket-keeper. His partiality was on-play, a slow wicket favouring his methods."
(Australasian July 16 1921 p21) 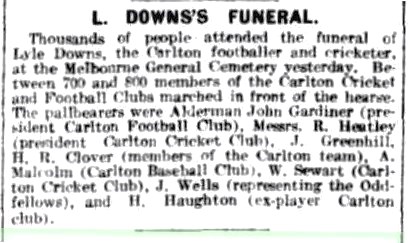