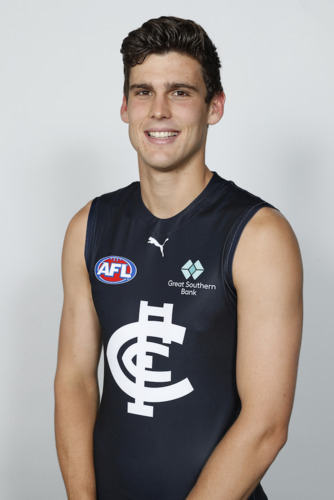 Lewis Young was the Bulldogs' third pick in the 2016 NAB AFL Draft (selection 49 overall), he was taken as key forward from South Australia but transitioned into a defensive role in his debut season at the Whitten Oval. Just 17-years-old when drafted, the South Australian scraped into draft eligibility by just 11 days. Young would play a total of 24 games and boot a goal for the Bulldogs who mainly used him as a key defender. At the end of the 2021 season the Grand Finalists placed a two-year offer in front of Young for more than a month and wanted him to be part of their long-term future. However, Lewis decided that there were stronger opportunities elsewhere and decided to sign on with Carlton for the 2022 season. The 22-year-old made the switch to the Navy Blue in a three-way trade that saw the Western Bulldogs receive pick No.52 from West Coast, who acquired Sam Petrevski-Seton who has returned home to Western Australia.

In July of 2017, Lewis Young found himself debuting in the long sleeves against the Carlton Football Club. In October of 2021, the newest recruit spoke about how much he was looking forward to wearing the long-sleeved Navy Blue jumper worn with distinction by some of the Club’s greats. It’s uncanny how many full-circle moments there are in football, and this is one of them. The 201-centimetre key defender officially became a Blue on Thursday, arriving from the Western Bulldogs in a three-way trade which saw Sam Petrevski-Seton land at West Coast. For the newest Blue, it was the culmination of a process where he admits he couldn’t help but feel the nerves. “It’s been a long couple of weeks with everything going on in the background, but I’m so excited that it’s done and I can’t wait to get started,” Young told Carlton Media. “I’ve been an avid wearer of the long sleeve in my career… funnily enough, I played my first game against Carlton in the long sleeves and I think there were five or six guys on the Blues’ side that day that wore it as well. “Hopefully I can don it soon enough!” Back when he made his debut, Young impressed with a polished showing in defence, collecting 21 disposals and nine marks on the MCG. While he has since combined his time in defence with stints up forward and in the ruck, it’s down back where he sees himself making a home and name for himself in the Navy Blue. And at 22 years of age (he turns 23 in December), he believes his best football is ahead of him. “I see myself as a key defender in the future,” he said. “Some of my attributes are that I like to intercept the ball and win the ball back. Hopefully I can be an intercept defender in the future for the Club. “‘Vossy’ and I have caught up probably two or three times now… he’s got such a great footy brain and was such a smart footballer, so I’m looking forward to learning and really growing with him.” It was just a month ago when Young was preparing for a potential Grand Final tilt with the Bulldogs, having played the opening two games of the finals series as a ruck-forward. It’s no surprise that he describes exchanging the red, white and blue for the Navy Blue in a matter of weeks as a “whirlwind”. But he can’t wait to get stuck in with his new teammates when pre-season gets underway late next month. “It’s a little bit hard waiting for something to be done that you have no control over,” he said. “When I heard it all went through, I was over the moon. “I got back from Perth a week and a half ago, so it hasn’t been a long time to sink in and have a rest. I’ll probably enjoy a couple of days here and then start getting back into it, ready for the pre-season.”