In charge at the Battle of Windy Hill. 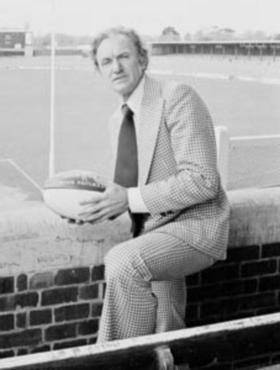 In a lifetime devoted to VFL/AFL football, Keith “Macka” McKenzie became a celebrated figure at two clubs; North Melbourne and Carlton. Following an illustrious 130-game playing career with North Melbourne, and four seasons as senior coach of the ‘Roos, McKenzie transferred his allegiance to Carlton when he was appointed as an assistant to John Nicholls in 1972. Later, he served as General Manager of the club during the turbulent period when George Harris was returned for a second term as President, and all up, dedicated 35 years of his long life to the Old Dark Navy Blues.

McKenzie began his playing at North Melbourne in their junior sides prior to World War II. Wartime service in the RAAF delayed the start of his senior career until 1944, but he then went on to play 130 games over eight seasons. An agile, skilful centreman or winger, he was judged Best and Fairest for the Shinboners in 1946, and wore the Big V in Victorian state teams on five occasions. In 1950, he was on a wing in North’s Grand Final team that lost to Essendon.

In 1951, McKenzie retired from League football to take on the role of captain-coach at VFA newcomers Moorabbin. He was Best and Fairest in his first year, and took his new team into the finals for the first time in 1952. He then packed his boots away and finished his playing days, before coaching Frankston to a Premiership in the Mornington Peninsula Football League in 1961.

Throughout those years, McKenzie maintained his links at Arden St, and, after serving as an assistant to senior coach Alan Killigrew for a couple of seasons, was appointed to the top job when “Killer” (the ‘hot gospeller’) was forced into retirement by ill-health. Unfortunately for ‘Macca,’ his five years in charge of the Shinboners produced little success, and he posted only 23 wins in 82 games. He was sacked by North after his side finished last in 1970, but he had his admirers at Carlton, and two years later he was appointed assistant coach of the Blues under club legend John Nicholls.

When he first arrived at Princes Park, McKenzie created something of a stir with his fashion sense. Always a snappy dresser, he favoured tailored suits in striped or check fabrics, and his bright ties made him easy to spot in a crowded room. Regardless, he threw himself headlong into his new responsibilities as Reserves coach, and took charge of the senior team three times in his own right; twice when Nicholls was on representative duties with the Victorian State team, and one other time when Big Nick was serving a one-match suspension. In all of those matches, Carlton came away with the win.

The first occasion was in round 12, 1972, when Carlton played Fitzroy at Waverley Park. The Blues were without Nicholls, Alex Jesaulenko and Geoff Southby, yet still accounted for the Roys by six goals. Later in that fabled year, Carlton famously beat Richmond in the highest-scoring Grand Final ever played.

‘Macka’ took charge for the second time in round 2 of 1973, when Carlton beat North Melbourne by 27 points at Princes Park. Nicholls (who was under a one-match suspension for striking a Geelong player the previous week) had to seek dispensation from the VFL to enter the ground that afternoon, in order to see the ’72 Premiership flag unfurled.

The third and last time McKenzie coached the Blues has gone down in football folklore as The Battle of Windy Hil; an extraordinary game against Essendon in round 14, 1975. Again, Nicholls, Jesaulenko and Southby were all on state duty when McKenzie sent Carlton’s depleted team out onto the Bombers’ home turf for the match of the day on Saturday, July 5, 1975.

Essendon jumped away to lead by 21 points at the first break, but after that it was all Carlton. Piling on an incredible 14 goals in the first 23 minutes of the second quarter, the visitors were taking complete control when full-forward Craig Davis was felled behind play. That incident sparked an all-in brawl, and a series of ugly clashes throughout the rest of the match. Seven players – four from Carlton, and three from Essendon – were later reported, as Carlton ran out winners by 80 points. David McKay kicked 8 goals for the Blues, while Robert Walls bagged five. Carlton’s score of 27.13 (175) that day (to Essendon’s 15.5.95), remains the Blues’ highest-ever tally against the Bombers.

In 1976, McKenzie was appointed Carlton’s General Manager, and held the post until 1979. Throughout the years since, he has remained actively involved in many aspects of the club’s operations, including the Spirit of Carlton committee. He was a long-time employee, friend and advisor to revered Carlton President Richard Pratt, and in 1995 - at the age of almost seventy-two - McKenzie returned once more to coaching at the newly-formed VAFA club Swinburne University, remaining in charge for two seasons.