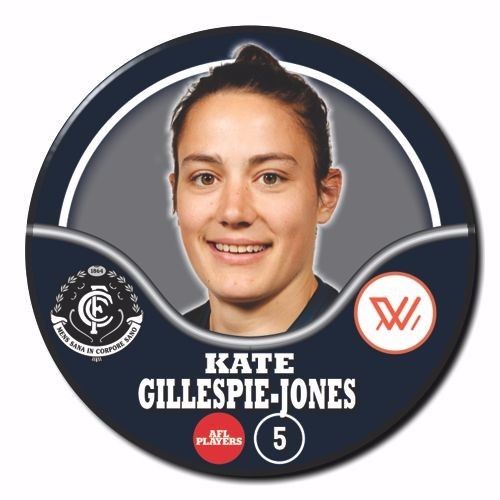 
The power athlete has played five seasons of senior women’s football, after falling in love with Aussie Rules as a child. She made her debut for Melbourne’s women’s team in early 2017 and prides herself on her ability to cover the ground, as well as provide an option up forward. Senior women’s coach Damien Keeping says the No.14 draft pick has a solid pair of hands and has the capability to make her own space. “Kate’s strength in the marking contest, coupled with her ability to burst through congested packs makes her a difficult match-up for any opposition,” Keeping said.

At the end of the 2018 AFLW Season Gillespie-Jones requested a clearance to the newly formed North Melbourne team. In the round 1 clash against the Blues Gillespie-Jones starred for the Kangaroos and would feature in the AFLW Coaches votes for that clash. It was revealed that Gillespie-Jones was likely to explore the option of a trade in the wake of the 2021 AFL Women's season. After not finding a new home, North Melbourne delisted her at the end of the trade period, she would play 24 games and kick 5 goals for the Kangaroos.


Persistence pays off for Gillespie-Jones
Kate Gillespie-Jones comes to Carlton after years spent working up the ranks of women’s football in Victoria. Picked up by the Blues at pick No.14 in the draft, the versatile 25-year-old is set to have an impact no matter where she plays on the field. Gillespie-Jones took up footy at a young age but was forced to give it up when she was told she couldn't play with the boys anymore. At that time, Gillespie-Jones was unable to find a way to continue playing and she didn't return to the game until she was 20. “I just needed to get back into sport. When I was young I was really athletic and I wanted to get fit and get back into that environment,” Gillespie-Jones said. “At first it was a social thing, then I got increasingly motivated to get fit and strong. Seeing the skills of the girls at the top of the competition really motivated me to get better.” Her motivation helped her move quickly up the ranks in the VWFL. She won back-to-back best-and-fairests with the Seaford Tigerettes in 2014 and 2015, before playing an important role in the club’s defining 2016 VWFL season. Gillespie-Jones’ dedication to the game also saw her represent Melbourne in two exhibition games last year, but she was keen on Carlton from the moment she met with the club. “I wanted to come here from the start,” she said. “Having an interview leading up to the draft, Damien (coach Damien Keeping) sold it really well. Carlton were really good and seemed really genuine.” Aside from becoming an all-round great footballer, Gillespie-Jones has also spent her time working hard at her studies. She is currently in the process of completing her PhD at Monash, her research: sensory changes in the brain after traumatic brain injury. Some of her research involves looking at changes that can occur after injuries on the sporting field - an irony that is not lost on her. “My supervisors laugh at me sometimes and say, ‘You’re gonna get a concussion so we’ll stick an electrode on you’,’” she said. “I’m not worried though, there’s risks with everything you do. Getting in a car is just as dangerous I think.” As one of the Blues’ tallest AFLW players at 179cm, Gillespie-Jones is looking to impose herself on the contests. “Everyone thinks I’m just a big friendly giant,” she said. “I want to make sure I’m really tough at the contest and putting heaps of pressure on the opposition. I think that’s really important.” Gillespie-Jones will line up alongside her teammates for the Blues’ NAB AFL Women’s season opener against Collingwood at Ikon Park on Friday night. Lucy Watkin, Carlton Media.


Gillespie-Jones stamps authority
Carlton’s Kate Gillespie-Jones says a greater focus on her attack at the contest allowed her to have more of an influence in the Blues' Round 5 victory over the Western Bulldogs. In Carlton’s previous four matches, the 25-year old collected 10, seven, three and six disposals against Collingwood, Greater Western Sydney, Adelaide and Melbourne respectively. But against the Bulldogs, Gillespie-Jones followed the advice of her coaches and put her body on the line to finish with a season-high 13 possessions. “Just before the game, the coaches told me to increase my physicality,” Gillespie-Jones said. “Going out there and doing that made me feel more in the game. “I was able to get some grabs and get physical around the contest which was important.” An increase in physicality was important for the Blues against a Bulldogs side that has demonstrated its strength in running and carrying the ball. With the game being a high-scoring affair, Gillespie-Jones said the Blues were challenged to prevent the Bulldogs from capitalising on easy opportunities, particularly when under pressure in the final term. “We had to make sure we blocked their exits out of the stoppages, and make sure we took advantage of them not getting back as fast as well,” she said. “The last quarter was really nerveracking. Everyone worked hard to get us over the line.” While the Blues need results to fall in their favour across the final two rounds of the AFLW season, Carlton’s last-gasp win over the Bulldogs has seen it remain in finals contention. The Blues will face Fremantle as part of a double-header with the JLT Community Series at Domain Stadium on Friday afternoon before taking on Brisbane in the final round of the inaugural season. - Lucy Watkin Carlton Media; March 7 2017


Hardiman, Gillespie-Jones depart
Carlton Football Club would like to thank Danielle Hardiman and Kate Gillespie-Jones for their contribution to the Blues’ AFL Women’s program. As foundation players of the Club’s inaugural AFLW side, the pair were recruited by Carlton via the 2016 national women’s draft. Runner-up in the Blues’ 2017 best and fairest, Hardiman played 12 games over her two seasons at the Club, while Gillespie-Jones notched up 13 appearances in the navy blue. Head of Football Andrew McKay thanked the pair for their services and wished them well as they continue their career at North Melbourne. “On behalf of the Carlton Football Club I’d like to thank Danielle and Kate for their dedication and commitment to our women’s program throughout their time at the Blues,” McKay said. “As foundation players of our AFLW team we appreciate the role they played over the past two years and wish them all the best for the future.” - Carlton Media.