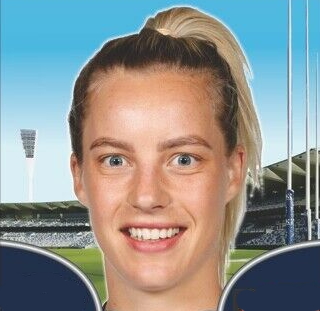 Jordan Ivey who was a former soccer player was recruited by Carlton as an injury replacement player mid-way through the 2017 season. She made her debut in Carlton's round 6, 2017 match against Fremantle at Domain Stadium. She was delisted at season's end after having played two matches at AFLW level. In May 2018 Ivey accepted an offer from expansion club Geelong to play with the club in the 2019 AFLW season.

At Geelong, Ivey played a lockdown role in defence in 2021, often given the task of shutting down the opposition’s most dangerous forward. A versatile player, Ivey’s strong tackles and sharp foot skills often propel her team from defence to attack. Ivey was promoted to vice-captain in 2021, having been a member of the team’s leadership group the previous year. Ivey was traded to the Melbourne FC for the 2022 season.


Former Ballarat Eureka Striker makes her mark in AFLW
It’s a different code, but former Ballarat Eureka Striker Jordan Ivey is still kicking goals. The Bendigo product made a habit of finding the back of the net for Strathdale Soccer Club and on Friday night she slotted a goal on debut for Carlton in the AFLW competition. The 24-year-old grew up in Bendigo and was a standout junior soccer player before moving to Ballarat for university studies. Ivey played state league soccer in Ballarat for the Eureka Strikers before a university football carnival opened up a new sporting world for the midfielder. “I started playing footy in Ballarat last year just for fun and played at the uni games on the Gold Coast,’’ Ivey told carltonfc.com.au “After that I played with the Vic Academy and I trained with them during summer and through the Academy is how I got picked up by the Blues to start training. “Through injuries is how I got elevated to the senior list.” Ivey, a former Bendigo South East College and Bendigo Senior Secondary College student, admitted to being nervous before her AFLW debut, but once on the field loved every moment of it. “It was an incredible feeling to get out there and have a crack,’’ she said. “When we were having team meetings was when I felt most nervous, but the girls got around me and really helped me throughout the game.” Football is in Ivey’s blood. Her father David was a triple premiership player with South Bendigo in the Bendigo Football League. “Jordan was always around the footy club when she was younger,’’ David said. “We’d play kick-to-kick in the backyard or on the QEO after South Bendigo games or training. “She got a taste for footy through that… but always played soccer. “(Making the AFLW) came out of nowhere and she’s done it all herself. We’re very happy for her.” Next step for Jordan Ivey is Carlton’s final home and away game against Brisbane at Ikon Park this weekend. Her attention will then turn to the new-look VFL women’s competition where she’ll play with Geelong. - The Courier: Adam Bourke.