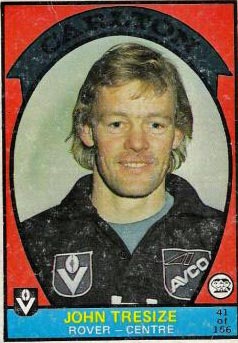 Tresize wore guernsey #22 in 14 games for Carlton from Season 1977 onwards. He kicked 1 goal for the Blues. Treize had a solid first season with the Blues in 1977 where he played 13 games and polled 5 votes in the Brownlow Medal. Early during the 1978 season Tresize headed back to the bush to play for his original club Kennington, he found the constant grind of travelling from Bendigo to Carlton for training and its impact upon his work commitments far too great a sacrifice. He would be another country lad lost to the big league.