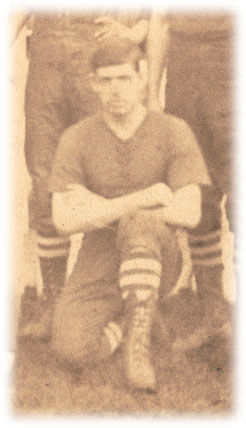 Victorian Football Association
DOB: 1860
DOD: June 02 1886
Career: 1878-79 1881-82 1886
With four players having the surname Rickards it is very difficult to ascertain which Rickards is which, James, John, Joseph, or T.
Team lists usually just list the player's surnames.
Most reports only give the last name, with some reports saying the elder or the younger, a few match summaries give the first names.

1877 October 13
At the Carlton Sports Day, a John Rickards of the Albert Park Football Club took part on the Senior Drop Kick Competition.

1878 A young and promising forward, a straight and sure drop kick and marks splendidly. Second for the First Twenty drop kick with 56 yards.(51.2 meters)
(The Footballer. 1878. p31)

1879 Like his brother - is a fine kick, and promises to become with a few season's "coaching" an excellent forward.
(The Footballer 1879 p29)

1881 After passing a critical illness has again donned the 'serge', is a magnificent drop kick, and as a centre forward possesses few equals; much improved with his speed.
(The Footballer 1881 p23)

Was a member of the Carlton touring side to Adelaide in 1881.
(The Carlton Story, H.Buggy and H.Bell p 50)

1885 John Rickards umpired a mid week game on Wednesday 29 July between Caulfield Stables and Flemington Stables on the East Melbourne ground.
The next day he played for, and scored a goal for the Wanderers in their victory against University on the University ground.