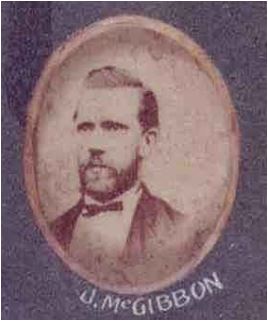 
Could this be John Macgibbon? See October 1881 for a photo of former Carlton players.

John Macgibbon was born in Scotland and came to Australia in 1854, his father would be the first postmaster of Hotham. John was Secretary of Lands for 47 years, before finally retiring on March 31 1914. He was an early captain of the Carlton Football Club and also captained Hotham (North Melbourne Cricket Club). Upon his retirement he was a member of the East Melbourne and Auburn Heights Croquet Club. John Macgibbon died on 1 April 1939 at the age of 90. He left a widow, 3 sons, and 3 daughters. 1
John was also appointed a J.P. (Justice of the Peace). He was buried at the Burwood Cemetery.

John Macgibbon was appointed as the first official vice captain of the club in 1874.


1870 McGibbon/Macgibbon named in the Carlton side to play Albert Park at Albert Park 23rd. July
(The Argus)

1871 A player named Macgibbon played in the match against a Richmond 20 at Richmond Park July 15.

1875 The Argus has Macgibbon named in a Carlton First Twenty side against a Carlton 25 in a scratch match at Royal Park on Saturday 8th. May.

1875 A back player of merit, has a puzzling and effective style of running with the ball; generally renders his club good service.
(The Footballer 1875. p27)

1876 Before the season opened the club had to fill serious gaps in it's ranks left by the retirement of such players as Harry Guy , Jack Donovan , Sam A. Wallace, J. Blanchard, Billy Monie, Billy Lacey and Macgibbon.

1877 June 30
Macgibbon was called out of retirement to play in the match against Williamstown on June 30.
The Carlton team had been in Sydney playing the Waratah club the previous Saturday and Monday and were expected back in Melbourne. However they had been delayed, and the Carlton vice captain McGill was determined that the match would go ahead.
He arranged for former players and second twenty/reserves players to fill the vacant spaces.
Carlton won 2-0.

Mr. John Macgibbon J.P. died at his home in Auburn on Saturday at the age of 90 years.
He retired from the office of Secretary of Lands on March 31 1914 after having served 47 years in the public service. He was one of the earliest captains of the Carlton Football Club and also captained the Hotham now know as the North Melbourne Cricket Club. After his retirement Mr. Macgibbon was a member of the East Melbourne and Auburn Heights Croquet Club.
Mr. Macgibbon came from Scotland in 1854 and his father was the first postmaster at Hotham. He is survived by three sons and three daughters.
The funeral will leave his home in Auburn at 3.30pm. to-day for the Burwood Cemetery. The funeral arrangements are in the hands of A. A. Sleight Pty. Ltd.
(Argus 03 April 1939 p2)