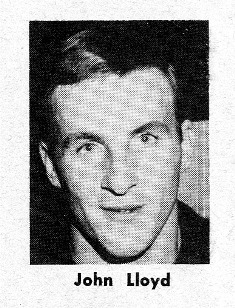 Although better known to football fans in general as the father of champion Essendon full-forward Matthew Lloyd, John Dudley Lloyd was a serviceable defender for the Blues in 29 matches over three seasons from 1965 to 1967.

Recruited from Yarrawonga, Lloyd wore guernsey number 18 when he made his senior debut for Carlton against North Melbourne on May 8, 1965 at Princes Park. Named as the Blues’ 19th man, he replaced winger Cliff Stewart during the final quarter and helped consolidate a big win for his team. After that, he waited until close to the end of the season for another senior opportunity, but showed that he was worth persevering with when he collected 18 disposals and six marks in only his third senior match, against Essendon in round 18.

John played another 10 games in 1966, before a broken arm prematurely halted his progress. He added another 16 games the following year, including his one and only finals match – the 1967 Second Semi Final in which Carlton fell to Richmond. However, only a few weeks later - after he had been left out of the Preliminary Final side that lost to Geelong - John announced his retirement from VFL football.

In 1968, Lloyd was cleared to Eaglehawk in the Bendigo Football League. After two seasons with the Two Blues, he transferred to Werribee in the VFA, and won their Best and Fairest in his second year. He then crossed to rival VFA club Port Melbourne in 1972, before joining Braybrook in the Footscray District Football League. As captain-coach of the Bombers, John enjoyed instant success - steering them to a hat-trick of flags in 1973-74-75.

In the years since, all three of John Lloyd’s sons have enjoyed successful football careers - most notably, Essendon captain, Premiership player and AFL Hall of Fame member Matthew Lloyd, who played 252 games and kicked 891 goals for the Bombers between 1995 and 2008. Unfortunately for Carlton, John did not play enough games for Matthew to qualify under the Father-Son recruiting rules then in place, so he ended up at Windy Hill.

The youngest of the trio, Brad Lloyd, won the Gardiner Medal as Best and Fairest in the AFL Reserves competition while playing for Hawthorn in 1997. After 11 senior matches for the Hawks, he was delisted in 1999 and returned to his original club, Williamstown. He captained the Seagulls from 2003 to 2006, and won their Best and Fairest award on three occasions.