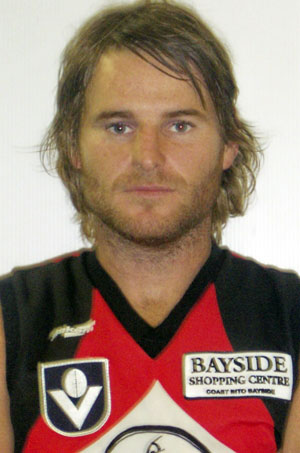 In 1998, at the age of 19, John Hynes played four consecutive senior games for Carlton on the way to winning that year’s Reserves Best and Fairest. A key position player from bayside Cheltenham, he had been recruited by the Blues at number 80 in the 1997 National Draft from Prahran Under-18s, and allocated Carlton’s guernsey number 26.

However, although he obviously had ability, it was soon plain that Hynes was just too small to play as a central defender at AFL level. Without the pace and polish for a midfield role, he was much more comfortable at Reserves level, where his madcap humour and love of partying endeared him to his team-mates.

Hynes made his senior debut for Carlton in the Match of the Day against Essendon at the MCG on a Sunday afternoon in early August, 1998. Starting from the interchange bench, he spent little time on the ground and picked up only one possession as the Bombers steamrolled the Blues in the last quarter to win by 6 points. His next three games were all at the same venue, producing another loss to Melbourne, and victories over St Kilda and Collingwood. His last match was another Sunday afternoon blockbuster against Collingwood, when more than 60,000 spectators turned up to see Hynes kick his second career goal in a nine-goal triumph for the Navy Blues.

Despite that emphatic win, Hynes played the rest of that season – and all of 1999 - with the Reserves, before he was delisted. During the 1999 season, Hynes was sent by the club to the same Gold Coast health resort (or "fat farm" as the media gleefully described it) as higher profile teammate Lance Whitnall.

After leaving Princes Park, Hynes spent a couple of years back on the Mornington Peninsula with Edithvale-Aspendale, before returning to the VFL with Frankston. In 2004 he was appointed captain-coach of the Dolphins’ Reserves, and by 2009 had returned to Edithvale-Aspendale as senior coach.

Hynes remained in the memory of one Blueseum contributor, who reflected this way;
My favourite memory of John Hynes comes from his long VFL career with Frankston. In a 2003 pre-season game against the Northern Bullants (Carlton's affiliated team) Hynes spent much of the day sledging past teammates still on Carlton’s list. Subject of much of this abuse (not particularly vicious, but very effective) was Ian Prendergast. Whenever Ian had the football, Hynes would ridicule him with shouts like, “Have they taught you how to kick yet?” Poor ‘Prenders’ shanked a few that day, but it was only a pre-season game, and Prendergast had the last laugh, because he went on to play a lot more AFL football than his tormentor.

Trivia:
Hynes was the only John (with that spelling) to play for Carlton seniors during the 20-year presidency of John Elliott.