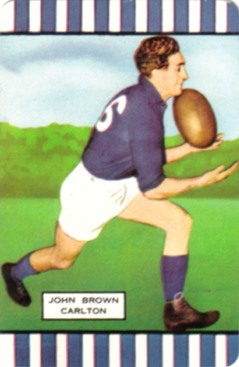 Jack was a solid, durable, no-frills defender who made it tough for any opponent to get a kick. By no means a dasher, he stuck to his man like glue and rarely ventured past the centre line. And viewed from an era of run-and-carry football, his record of not once having a set shot for goal in his six seasons with the Blues, is quite remarkable.

A late starter at elite level, Jack was 26 years old when played his first match on a half-back flank in a 5-point loss to Essendon at Princes Park in June, 1950. From then on, his average of 15 games a season was an indication of his consistency. But unlike his father and older brother, Jack’s time at Princes Park was spent in an era when Carlton could do little better than finish on the middle rungs of the VFL ladder.

The only exception came in 1952, when the Blues - despite playing two draws during the season - still managed to qualify for the finals in fourth place. Carlton met Fitzroy in the first Semi Final in front of 60,000 spectators at the MCG, and were beaten by one point in a thriller. Later that night, Blues’ full-forward Keith Warburton collapsed and was rushed to hospital with serious internal bleeding. His team-mates rallied to provide blood for him, and only numerous transfusions saved Keith's life.

Jack Brown played on for three more years after that one taste of finals football, then retired on a high only a few weeks short of his 32nd birthday, when the battling Blues upset third-placed Geelong by six points in the last round of 1955. He wore our number 16 guernsey throughout his time at Carlton, and was the 642nd player to have represented the Famous Old Dark Blues.

CARDINIA
"Our relieving teacher, Mr. J. V. Brown, Has received notice of his permanent appointment as head teacher here.
John by the way, is a Carlton footballer."
(The Dandenong Journal May 20 p9 1953)