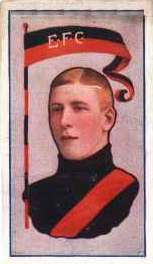 
Perhaps this was a story of 'one that got away'. Although starting his career with Carlton in 1902 after being recruited from Carlton Juniors, for the modest return of 6 games, 'Bull' Martin played in the big league for a further 8 years in between 1907 and 1914, with both Essendon and Fitzroy, including representing the Bombers against Carlton in the 1908 Grand Final.

He played in Essendon's 1912 premiership side and after playing his last game for Essendon in Round 9, 1913 then turned out with Fitzroy in Round 12 and was a member of their 1913 premiership side, two premierships in two years with two different clubs. His last Fitzroy and league game was in their losing 1914 Semi final side against Carlton.