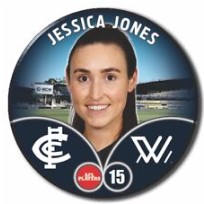 Carlton selected key defender Jessica Jones with pick No.67 (Victorian pick No.37) in the 2022 NAB AFL Women’s Draft. Hailing from the North Melbourne VFLW team where Jones formed part of the leadership group, the Blues have added an experienced head to provide defensive cover leading into season seven. Playing 12 of North’s 14 VFL games this season, Jones averaged nine disposals per game but her key focus was on shutting down her direct opponent, often taking the opposition's key forward and doing everything in her power to keep them quiet.

Jones’ strength and determination shown throughout her time at North will be complemented in Carlton’s backline alongside the likes of Kerryn Peterson and Mua Laloifi.Carlton General Manager of Women’s Football Brett Munro said it was not only Jones’ ability to shut down her opposition but also her versatility to play a number of roles which made her an exciting prospect. “Jessica is a great addition to the team with her ability to shut down her opponents and also play as a ruck when needed,” Munro said. “Having previous experience in the leadership space, she’s a mature age and of high character, so we think she’ll be able to make an impact on our program from the outset. “She has earned her chance and we think she’s only going to get better in an AFLW environment, working with not only her teammates but also our new backline coach in Nicole Callinan. “We are really excited to get her into the Club and have her start training with the rest of the team.”