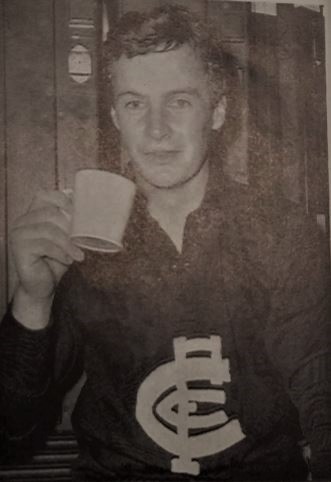 Just the sixth player in Carlton’s history to wear guernsey number 38 at senior level, Jeffrey Clifford William Trotman represented the Blues in three matches in 1965. Recruited from Ormond Amateurs, he had originally played for Brighton Grammar.

A versatile type who could be dangerous around the goals, Jeff caught the eye of Carlton’s new captain-coach Ron Barassi during the ‘65 pre-season, and didn’t have to wait long for his call-up. In round 3, the Blues travelled to the Lake Oval to take on South Melbourne, with two new faces in the side; Trotman, and future Premiership star Bryan Quirk. While Carlton lost to a more cohesive Swans team by 15 points and Quirk kicked three nice goals, Jeff sat on the reserves bench for most of the game.

Omitted after that one outing, Trotman spent most of the remainder of the year with the seconds, playing some good football, and regularly kicking multiple goals. Eventually, his consistency earned a recall, and he warmed the bench for the seniors again in the last two games of the season; a loss to Richmond in round 17, and a memorable win over Essendon in round 18. Carlton wound up that watershed year in sixth place on the ladder, having taken the first wobbly steps toward Premiership glory in 1968.

Although Princes Park was full of optimism at the time, Trotman evidently decided that his football prospects were limited. So after just that one year with the Blues, he sought and was granted a clearance to VFA club Williamstown. He was an instant success with the Seagulls, winning their Best and Fairest trophy in his debut year. But after being made vice-captain in 1967, he managed only five more matches before a serious illness forced his retirement.

Tragically, Jeff was killed in a car accident on the 29th December, 1967 - barely two years after playing his last senior game for the Blues, and three weeks after his 24th birthday.