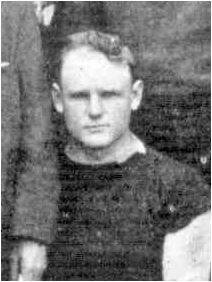 1892 August 13
Leith scored a goal in the victory against Footscay on the Warehousemen's ground in St. Kilda Road.

The above photo is of Jack playing for Melbourne in 1899.

Played well at times during 1895 but would go to Melbourne in 1896.
(Centenary Souvenir of Carlton Football Club p21)

1893 Leith was the best of the Carlton forwards in the match against Geelong at the M.C.G. on July 29.
He scored 3 goals from "splendid left foot punt kicks".
(The Argus)

1895 At the University Ground in the Carlton vs Port Melbourne match on August 24;
Leith kicked off with a strong wind at his back, he kicked the ball over the heads of the waiting players and it bounced almost the full length of the ground until it was forced over the boundary line. Leith who had followed up his kick, snapped a goal when the ball was thrown in.

1896 At the V.F.A. Permit Committee meeting on May 1 the application for Leith to transfer to Essendon was refused on the grounds that the committee was not satisfied that the clearance was bona-fide.

1896 May 16
Melbourne played Geelong.
The Argus May 18 (p5) said; "Leith's long left-foot kicks were of great use to the side, but it is a pity that Melbourne's gain should be Carlton's loss."

1896 Leith playing for Melbourne in the clash against Carlton at the M.C.G. on July 25.

1935 The Argus April 25, reports the death of Jack Leith, aged 62, former Carlton and Melbourne player and a handy cricketer.
He was one of the ground staff of the Melbourne Cricket Club, and for many years was in charge of the scoreboard.