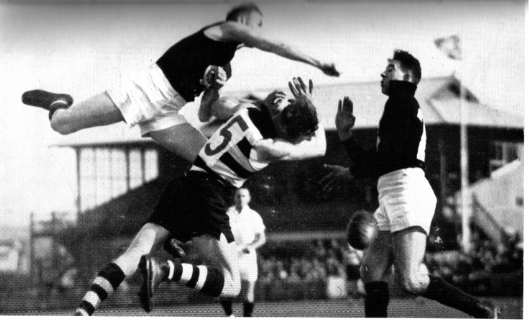 Famous for his dominant game in Carlton’s 1938 Grand Final triumph over Collingwood, and once described by leading football writer Alf Brown as 'courageous almost to the point of stupidity,' Jack Hale was born to play for the Blues. Regarded as one of the club's great rovers, his fine playing career was cruelly cut short by a serious leg injury.

Jack came into the world, and spent his childhood in Richardson St. Carlton – only one good drop kick from Princes Park. As a youngster he stood on the terraces with his father to watch Carlton play, and like so many others before and since, dreamed that one day he might wear the Navy Blue. He developed into a star at schoolboy level, represented Victoria, and was offered a trial with the Blues. From there he never looked back.

After a couple of seasons of grounding with the seconds, Hale was 19 years old when he played his first senior game in 1933. A quick and skilful rover or centreman at that time, his first senior coach at Carlton, Dan Minogue, saw him more as rebounding defender and played him as a half-back flanker. It was a role that Hale came to relish, and he was a regular Victorian state player in the early part of the 1930’s.

This was a tough time economically for every Australian family, as the country reeled from the disaster of the Great Depression, and the near-collapse of the national economy. Those with jobs earned an average 30 shillings (three dollars) a week. Jack’s father was one of the many thousands left jobless, so Jack’s playing wage of three pounds (six dollars) per game, plus another one pound (two dollars) in wages he earned from his job in a jewellery store was crucial in supporting his family.

By season 1937 Hale had claimed back his preferred first rover spot in a talented but under-achieving Carlton team. Standing 175 cm and scaling 76 kg in his number 11 guernsey, he was bigger than most of his opponents, but gave nothing away in pace. He was also a very good mark for his size. Meanwhile, having finished between third and fifth on the ladder for four years in succession, the Blues needed a spark – and it came in the form of new captain-coach Brighton Diggins.

A champion ruckman in South Melbourne’s 1933 Premiership team, Diggins brought iron discipline and inspirational leadership to Carlton, who topped the ladder in 1938, then comfortably beat Geelong in the second semi-final. In that game, however, Hale was knocked senseless. Severely concussed, he was off work for a fortnight and for a while, seemed destined to miss the Grand Final showdown against Collingwood. Fortunately, he trained on the Thursday night prior to the decider and was selected – although doubts lingered about his total fitness.

Diggins knew that one of the keys to a Carlton victory was to limit the influence of Collingwood’s star rover Des Fothergill. Hale was given the job of tagging Fothergill and asked to sacrifice his usual positive influence for the good of the team. It didn’t work out that way. Fothergill was kept in check for most of the match all right, but Hale still had a blinder. In front of more than 96,000 spectators at the MCG, Jack was an almost unanimous choice as Best on Ground, as Carlton skittled Collingwood by 15 points.

“To be part of the team which defeated Collingwood that day was a great experience,” Hale said later; “the crowd was so massive that it spilled over the MCG fence to sit three deep behind the boundary line. I just couldn’t do anything wrong. It was one of those days when the ball just seems to follow you.” Late in the game, Fothergill found space on two occasions and notched goals to keep Collingwood within sight of victory. But almost immediately, Hale pushed upfield and flew for a sensational mark in the Carlton goal square. He went back, and kicked truly to seal Carlton’s first Premiership for 23 years. Hale, Diggins and every player in the Old Dark Navy Blue that day were instant heroes.

Somewhat understandably, Carlton faded to finish fifth in 1939, as war clouds gathered over Europe. Jack continued in consistent good form, and in 1940 kicked seven goals in a match. At the time, this equalled the VFL record for a rover. Then, in round two of the 1941 season, Carlton played Richmond at Punt Road Oval.

“I’d kicked the ball down to the forward line, but it came back quickly,” Jack later explained. “I went for it again, and the next thing I knew I was lying on the ground with the bone sticking out of my leg. Even the Richmond players – who in those days, if they saw a nose they’d punch it – were sympathetic. It was a bad break. I couldn’t walk properly for two years, and never played again.” At just 26, Jack’s on-field career had ended after 123 games and 78 goals, but he wasn’t lost to the game.

He went on to coach Carlton’s Reserves team for four years, before accepting an offer to join South Melbourne. After a season with their seconds, he was appointed senior coach midway through 1948, but it wasn’t a happy time for Jack. Torn by dissension at committee level, the Swans struggled near the foot of the ladder, and Hale resigned in disgust after just two seasons. In 1950 he was approached by Hawthorn, and, despite some early misgivings, went on to coach the Hawks for nine years.

“When I went to Hawthorn,” he said, “I took the Carlton spirit with me. I wanted to create a Hawthorn spirit by encouraging the local kids to become involved. I suppose it was the start of the ‘family club’ tradition.” In 1957, he took the Hawks into the VFL Finals for the first time, before calling it a day in 1960. In 1961, John Kennedy coached Hawthorn to the club’s first flag and was quick to pay tribute to Jack Hale, whose years of work with the Hawk’s youngsters had laid the foundations of their triumph. “Jack Hale taught Hawthorn to hate defeat,” said Kennedy.

After his coaching career ended, Jack was appointed a member of the VFL Umpires Appointment Board and held that position for 15 years. He was a Life Member of the Carlton Football Club, the Hawthorn Football Club, and the AFL. He passed away on the 25th June, 2001 aged 88.

After the Round 3, 1935 Carlton-Richmond match, Hale was awarded one of two Olympic silver medals presented to the club by Councillor Frank Beaurepaire, and inscribed with Carlton's motto "mens sana in corpore sano". Eric Huxtable received the other medal, given to Carlton’s best players in the game.

Jack was one of the few VFL players who was an exponent, by then, of the long-lost art of place kicking. He had been trying to kick a goal with the kick, but had little luck. It is not known how many goals Jack had scored with that type of kick, but when he did manage it in Round 17, 1940 both The Age and The Argus newspapers highlighted his achievement. Unfortunately Hale would only play three more games before injury forced him in to early retirement.

The last known place-kicked VFL goal was by Fitzroy's Tony Ongarello in 1955 at Brunswick Street against Geelong, who used one only out of desperation because his goal kicking that day was so poor. After this initial success Tony scored another placed kicked goal on that day.
In 2012 Carlton historian Tony De Bolfo interviewed former junior Rugby player Dennis Armfield who used to use the place kick, about it's ease of use compared with the drop punt. Tony also spoke to former Fitzroy player Tony Ongarello.
https://archive.is/20120730024259/http://www.carltonfc.com.au/news/newsarticle/tabid/4311/newsid/135465/default.aspx

Articles: Every Picture tells a story - Signatures from 1935